Dear friends, followers, and supporters alike! On the fourth of May, when still living in Örebro, I was very, very lucky to pay a visit to the highly interesting and spankingly new Swedish distillery Agitator Whiskymakare located in Arboga (whiskymakare simply means whiskymaker). I am so happy to have been the first whiskyblogger to visit the distillery by personal invitation from the two distillers/distillery workers Oskar Bruno and Christian Wikström (if you recognise their names it’s probably because they used to produce whisky at now closed Grythyttan Distillery). 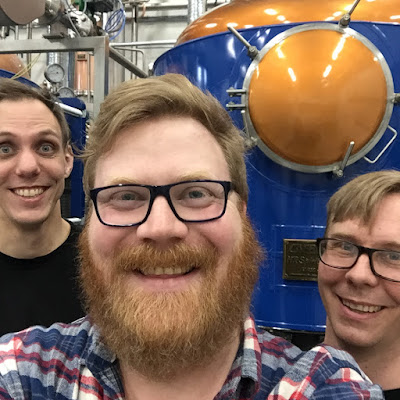 Oskar to the left, SamuelWhisky in the middle, and Christian to the right

I happen to know Christian a wee bit from back when we studied at Örebro University together, and I’ve come to know both Oskar and Christian more and more in recent time. Partly this is because they’ve both attended some of my tastings (yes, you sure got that right, just a tad ”scary”/nervous to host tastings with such knowledgeable guests in the crowd). Oskar is the Distillery manager/Master distiller, and Christian, I guess, can be thought of as the Second Distiller.

I was very lucky not only to pay a short visit, but also to be asked if I actually wanted to spend a whole workday at the distillery. Both in order to get a proper sense of their unique production process given the fact that this is the only known maltwhisky distillery in the world using vacuum distillation, and also to actually ”work” and help out during my visit (yay!). So, in this picture-driven blogpost I’ll first take you through most of their equipment and the production process as I’ve come to understand it (PART 1), and secondly tell you specifically what I got to do and help them with during the day (PART 2). Ok folks, here we go! 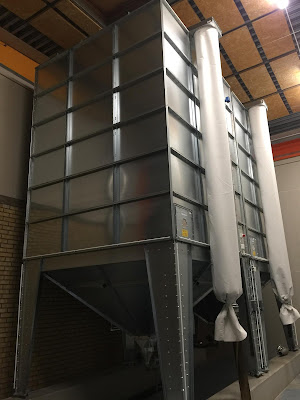 These two silos each hold 18 tons of malted barely. The silos are located in the same building, but in another room than the distillery itself. The whole process starts with around 1,35 tons of malt being sucked through a vacuum system into a mini-silo (a ”middle-container”) located above the mill. 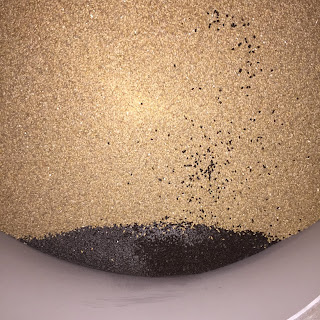 This is a view into the mini-silo. On the day I visited it was loaded with a mix of 85 percent barley and 15 percent (200 kilograms of) black roasted wheat. 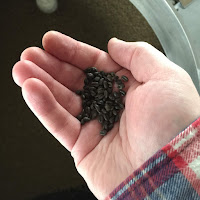 The black wheat in my hand. Tasted kind of like coffee. 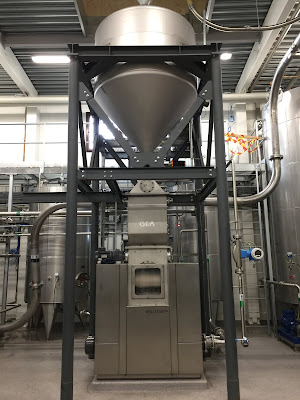 This picture shows the mini-silo located on the top, and below it the mill itself. 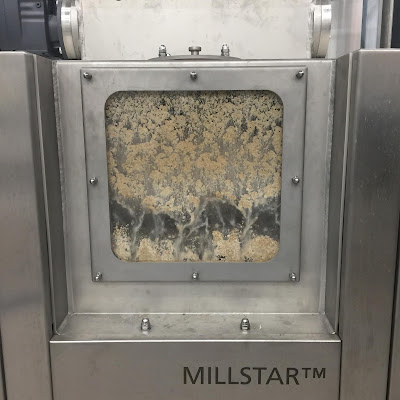 The mill used at Agitator is actually a so called wet-mill where warm brewing-water is added both before the milling and the crushing of the barley starts, and during the milling. Thanks to the adding of water, the husk basically slides of the barley in the milling process. The adding of water gives more fresh flavours (the water also makes sure there is no risk at all of any dust-explosion, a great benefit with watermilling). When the milling is done, the mash (grist and water) is pumped directly into the mash tun. 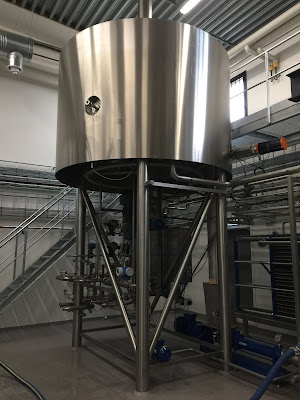 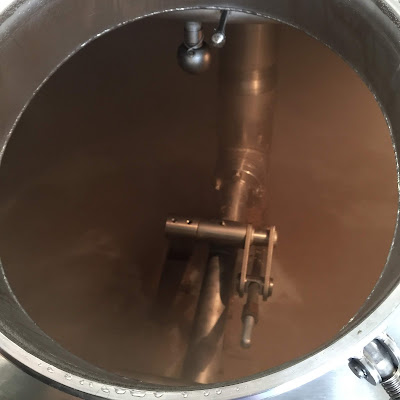 In the mash tun, the second water is added in order to convert the starch into sugar. Normally water is added three times, but at Agitator it is added seven times (!) in order to get as much flavours and sugars as absolutely possible. When the mashing is done (after about 6 hours), it has resulted in 5400 litres of wort. 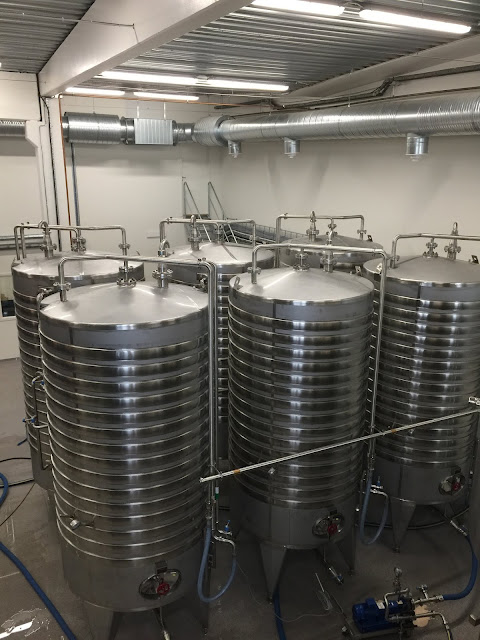 The cooled wort (cooled from 60° celcius to 20° celcius) is then pumped into one of these six fermentation vessels where water and yeast is added. The fermentation, where the yeast turns the sugar into alcohol, goes on for 168 hours/seven days (!) which results in a mash at around 10% (!) ABV. 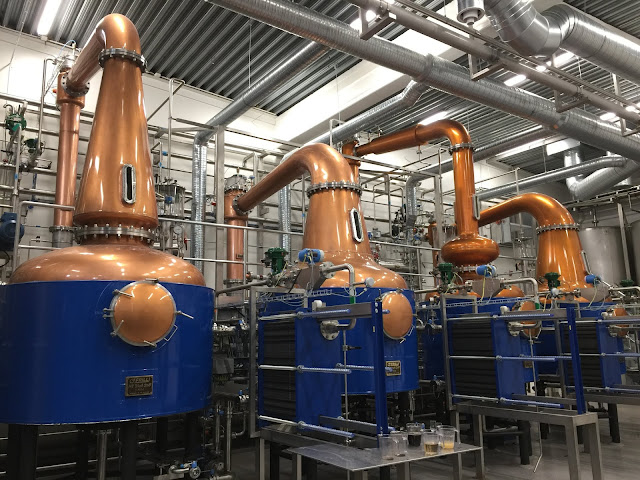 Agitator is equipped with four vacuum potstills. When the mash is done (fermented) it is ready for distillation and it is at this point pumped into… 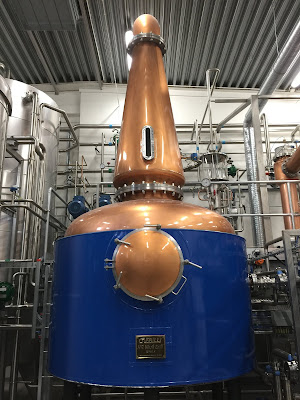 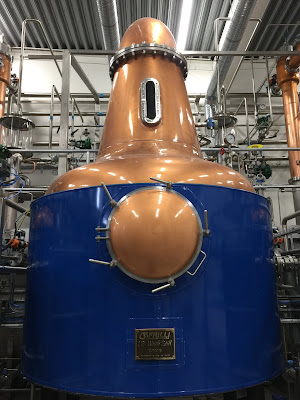 These stills can both take around 2700 litres each. Thanks to the vacuum system the boiling/distillation starts at a mere 63°C (instead of the normal which is around 92°C). When the first distillation is done (washstill no.1 360 minutes, washstill no.2 240 minutes) we have a low-wine at around 30-35% (!) ABV compared to the normal strength at around 20% ABV. Washstill no.1 is connected to… 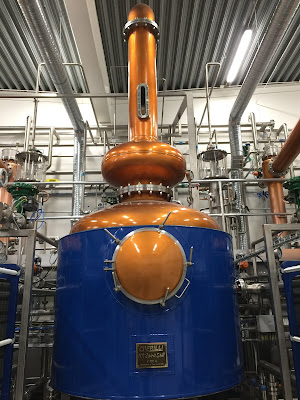 still no.3 (spirit-still no.1), and washstill no.2 is connected to… 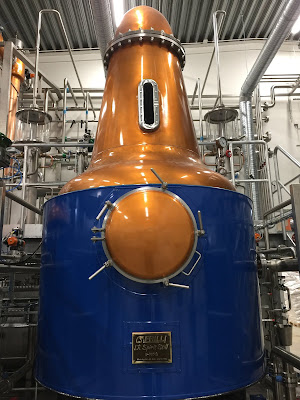 The stills at Agitator are designed so that they can produce two main styles of (completely different) newmake; stills no.1 and no.3, the tall and narrow stills, are the high reflux stills that result in a clean and fruity newmake. Stills no.2 and no.4, the short and chubby stills, are the low reflux stills that result in a heavy and robust newmake. Of course these two main styles can also be mixed/combined creating a third style. Adding to this it should also be said that the end product of course can be varied in a manifold ways by changing and altering the time of the cuts. Mainly though, Agitator will produce 2 to 3 styles of new make. Something highly interesting to note in the case of Agitator is also that they only use peated malt (30ppm and up), but the high reflux stills actually create a newmake style in which there are no peated flavours, at all! The low reflux stills create a bold, heavy, and earthy peated newmake. Very cool, very cool indeed!

[Update 200526: Since October 2018 Agitator alternates between peated and unpeated malt; the majority of the time they use 40ppm from Castle Maltings (Belgium), and every now and then they use 0ppm from Viking Malt (Sweden).]

One distillation batch results in around 300 litres per spirit-still, at still-strength. To run the whole process from start to end takes roughly 8 hours, and the whole distillery can in fact be run/managed by one person alone. At the current rate, Agitator produces 100k litres of alcohol per year. 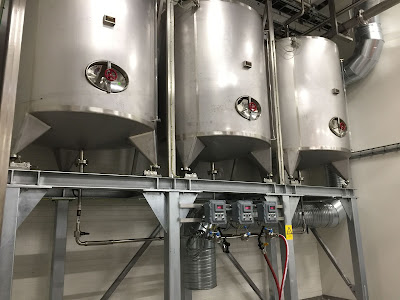 When distillation is complete, the newmake is pumped into these three separate end-tanks; one for the high reflux (still no.3), and one for low reflux (still no.4), and one for a mix of the two. In these tanks water is then added in order to reduce the spirit to 55% ABV, which is the filling-strength preferred at Agitator. Something further highly interesting to note in the case of Agitator is that the mashing and distillation at Agitator is controlled by software. The recipes and times for the cuts (cutting-points) is decided by the sensory expertise of Oskar and Christian (that is, nosing and tasting). The process is controlled with the aid of advanced automation, which allows Oskar and Christian to focus on the parts of the process that are critical for the quality of the product.

PART2
My day had an early start when Oskar picked me up at my place in Örebro at 7.25 in the morning and we travelled to Arboga and the distillery by car. A great opportunity to have a chat with Oskar about beer production, whisky in general and Agitator Whiskymakare in particular. It was at this point that I started to realise how special a day this was actually going to be and how very lucky I was!

When we arrived at the distillery both Oskar and Christian gave me a short tour through the distillery and the production process. I also had the time to ask some questions trying to grasp it all. After the tour, it was time for some work! 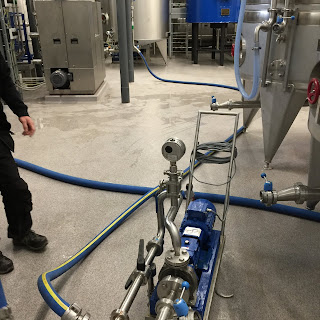 First I helped Christian to hook up one of the fermentation vessels to a pump that pumps the wash into the washstills. 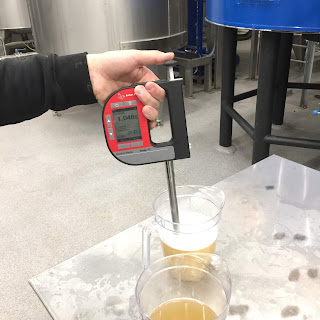 Next up, Christian ordered me to be stand-by at a valve that, if neccesary, is manually regulated to release vacuum pressure in the washstills during distillation. I was very nervous when checking so that the boiling and the foaming did not pass over… 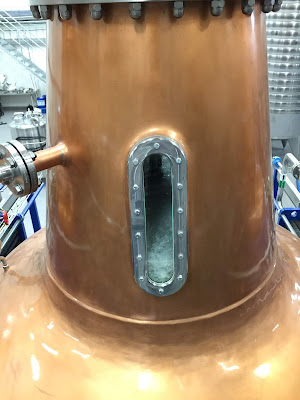 this small ”window” in the stills. If this were to happen, the effect to the stills would diminish in order to reduce the foaming. Something we did not want. When regulating the valve, one had to be very quick in order not to release too much pressure so that the boiling went low. If these things were performed poorly by me, it would simply cause the distillation to take more time than necessary. Again, something we did not want. 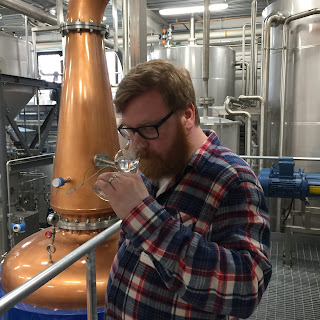 When all was safe and the distillation could manage itself (run by Oskar from the computer-room), Christian and I sampled some different styles of newmake… 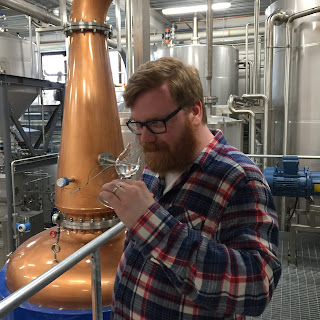 and tried some spirit at different cut-points in the ongoing process, very interesting and very tasty! 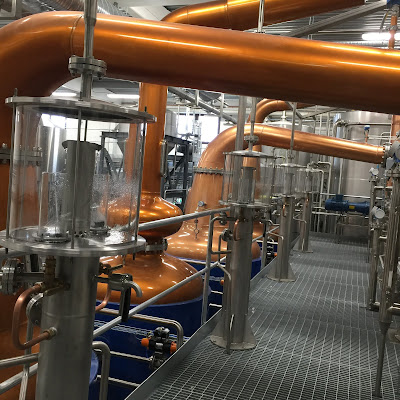 After lunch and coffe, I was allowed to wander freely, first in the distillery to shoot some more pictures… 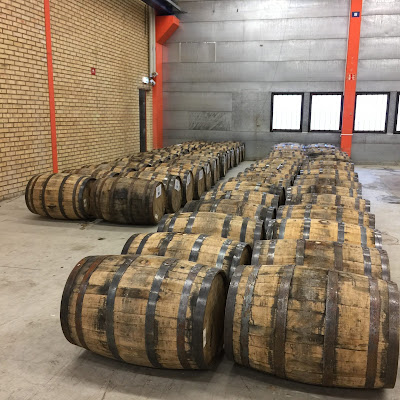 and then in the maturation warehouse to have a look at some of the casks and shoot some pictures there too. 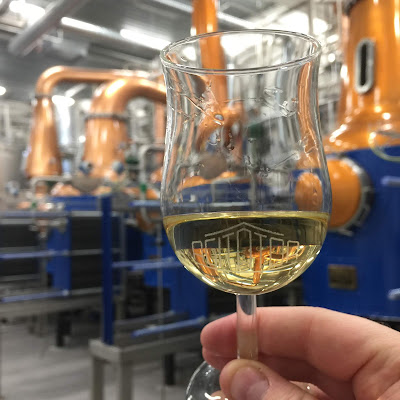 Next up, I got to try a 2 month old sample from a bourbon cask, very tasty!

Next up, Christian and I moved a number of casks from the warehouse to the filling station. The warehouse at Agitator is in fact quite interesting since it is heated with ”waste heat” from the production. This is done in order to create shifts in temperature so that the maturation can be increased or slowed. The warehouse temperature will never go below 0° C, but can go as warm as 25° C.

In the warehouse Christian showed me how to roll the casks the cool and easy way. As you can see it was hard and tough work, but really fun! 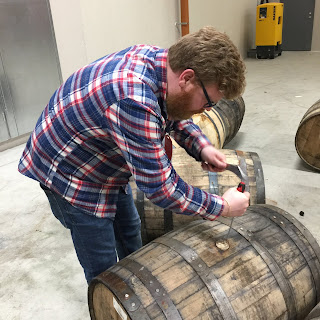 When all the casks needed for the day had been moved, I helped prepare the casks for filling by removing the ”lid” from the bungwhole, perhaps using somewhat unconventional tools (per Christians instruction); a screwdriver and a wrench. 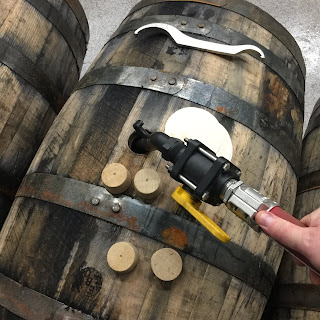 When the casks had been prepared I filled six casks; casks no.111-116, all of them bourbon barrels. During filling it was really hard not to spill newmake all over my hands, ”unfortunately” I had no paper or towel nearby, so I had to taste some of it. 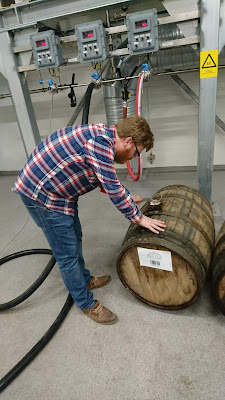 When the filling was done I put the lids back in the bungwhole and graciously rolled the casks back into the warehouse. 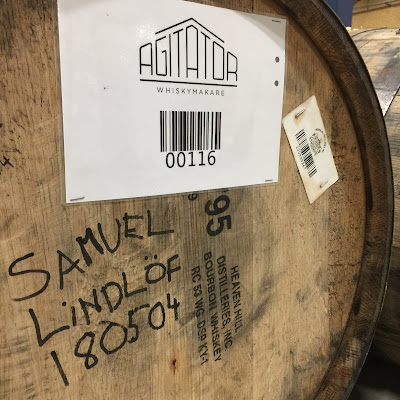 Then I was asked to sign a cask, wich was of course a great feeling indeed! Hey, I have ”my own” cask at Agitator, wow! 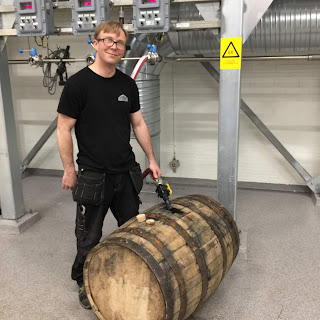 Christian then took over and filled some more casks 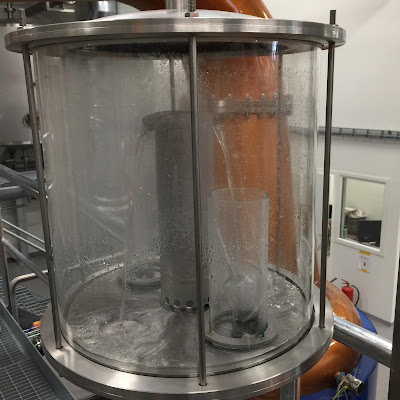 during which I walked around the distillery taking some more pictures (in this case on one of the spirit safes), and asking some more questions. When the afternoon had arrived and the workday was (sadly) over, Christian drove me back to Örebro, while Oskar stayed behind to clean up my mess. 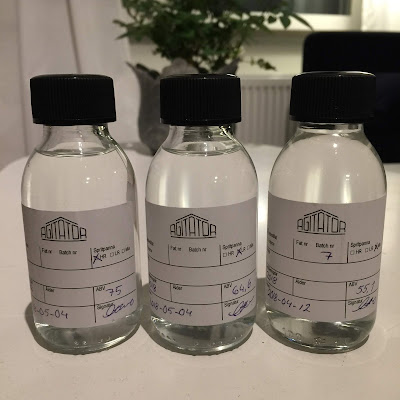 But, before leaving I was given three samples of the newmake I had helped produce! I will tell you more about them, and review them for you all, in the near future for sure, but I can tell you already now people, this is some very, very high quality newmake! Please do feel free to click this link in order to watch a short movie that Agitator put together from my visit. Big, big thanks to Oskar and Christian for the invitation and for a fantastic visit! I’ll never forget, and I sure would love to come back soon!