My journey to Highland Park Distillery!

Friends and followers! As some of you might have understood from a post on my FB-page I recently experienced a fantastic journey to the Orkney Islands. More precisely the destination was the little town of Kirkwall (sort of the capitol of the Orkney Islands) and even more precisely: The Highland Park Distillery! But what was the background for this trip? How did it come about? Well, as you all know I’ve been working the whiskyfestivals and fairs for Edrington since 2012, mostly taking care of my favourite brands Connemara and Laphroaig.

During the last night of this years festival in Gothenburg, Senior Brand Ambassador Martin Markvardsen and Dani, the Fair Coordinator of Edrington, shared the fantastic news to me and my fellow colleague Stefan, that they were both very happy with our contributions during the recent years and that they therefore wanted to show their appreciation. Hence, we were invited to see Orkney and the Highland Park Distillery partly as a ”Thank you!” and partly as a training. Perhaps you could even call it an education trip in order learn more about the distillery and the whisky being produced there. Now if you ask me, that’s simply a great way to say ”Thank you”! So, in this post I will share my journey, experiences, and some nice pictures with you my dear friends and followers. Oh, and further on in this post I also have the great privilege to share some exciting news of what the future holds…

Sunday 24th of July
We had travelled from Stockholm to Amsterdam and from Amsterdam to Aberdeen. In Aberdeen we were lucky enough to enjoy some Highland Park 30yo!

Then, in the early afternoon we found ourselves boarding the very small propeller airplane (30 seats) that was taking us the 30 minute ride or so to the Kirkwall Airport. The plane indeed turned out to be quite bumpy…

We arrived safe and sound at the Kirkwall Airport!

Martin met up with us as the airport. During our stay he was our ”personal guide”, sharing and knowing all that is worth to know about the Viking history of Orkney, as well as all there is to know about the past and present of Highland Park Distillery! Wow, what an honor!

After checking in at the small and picturesque Orkney Hotel...


we headed for the bar to have some lunch and a couple of pints.

After that Martin took us all to see the great and beautiful St Magnus Cathedral situated in the very center of Kirkwall.

The cathedral was built in honour of Magnus Erlendsson, earl of (half of) the Orkney Islands between 1108-1115. The building of the cathedral started in 1134 or in 1137 depending on which source one turns to. Anyways, why were we taken there to see the cathedral? What relation is there beetween the St Magnus Cathedral and the Highland Park Distillery? Well, as Martin tells us in this picture 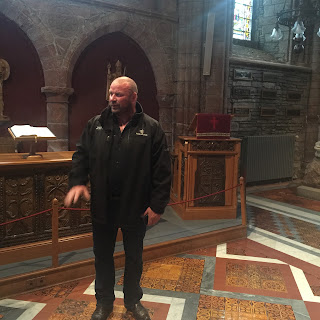 the ”churchman” Magnus Eunson, and more importantly the founder of Highland Park Distillery, hid away some stocks of his maturing whisky from the exciseman. Where he hid it? Below the church floor of course!

During the service in the church (!) Eunson took notes of who of the people in the congregation that wanted to order some of his whisky. What a daredevil!

We ended the day by having dinner at a really nice restaurant, as a starter I had some local beer and deep fried Haggis, served with what seemed to be a mango chutney, yummie!

Monday 25th of July
After a full scottish breakfast at the hotel (yummie again!), Martin took us to see the moor/bog where they cut the peat used in the kiln for drying the malted barley. The name of the moor is Hobbister.

Seeing the moor and its surroundings was a great experience, I now understand a lot more about peat and its different layers

I’ve also experienced what makes the peat of Highland Park so special. That’s right, Hobbister is litterally covered in heather, and the peat is full of it as well. This is what makes Highland Park whisky smell and taste so beautiful of heather honey!

and more importantly we visited the great ’Ring of Brodgar’! Wow what a mysterious and beautiful place!

Before leaving we where lucky enough to taste Earl Magnus Edition no.1

After some lunch and a pint we finally headed to the Highland Park Distillery!


At the end of the distillery tour we had the opportunity to smell an empty bourbon cask and then an empty sherry cask.

Right next to those casks stood this beautiful cask marked ”1968”, which we also had the opportunity to sniff, unfortunately is was empty...

I was so sad cause I really wanted to taste something during our visit that was drawn straight from cask. When we had sniffed the 1968 cask, Martin asked with a secretive voice: ”Do you wanna taste it?!”. To our joy and surprise he had actually prepared a peedie dram for each  one of us from this very cask. The ABV was 40,1% so as you can all understand it had been bottled in order to prevent it from going below 40% It was an amazing experience to taste a single cask HP at such a prominent age as 48yo! The whisky was drawn in the month of april 2016 from an american white oak hogshead that had previously contained oloroso sherry! I think you can all imagine the feeling... As with all of Highland Parks sherry casks this one was built and filled in Jerez

After the tour we were invited to Martins office for an absolutely amazing tasting.

As you can see from the pictures below we sure enjoyed some very, very special bottlings!

And, in order to get some perspective, we started of with some Highland Park New Make. Oh no, not the 50% version available in the shop, instead Martin had managed to source some of their new make at filling strength (69,8%)! Wow! After that we enjoyed and old version of the 12yo, bottled in 1998 (The average age in this version is 18 years old but it goes all the way up to 25 years old). Then we tasted the core range 18yo that is produced today, followed by the core range 21yo, also produced today. Then we were happily surprised to see the Bicentenary 21yo! A great dram indeed

After that we moved on to a very special whisky: A distillery exclusive hand filled bottling, just over 600 bottles, a 13yo at vatting strength 53,3% ABV, matured in american oak sherry hogsheads. Let me tell you people, this was a great one and so I am glad that I decided to buy a bottle to bring with me home.

And finally, the tasting ended to our joy with the Vintage 1970, at 40 years old!

Tuesday 26th of July
We started off our last day with visiting and having a tour at the Scapa Distillery (but that is another story). After that we drove on to see the very kind Mr. Ian Moir. As some of you know Ian is the Orkney-based ambassador of the fanclub Highland Park Appreciation Society. Ian generously invited us to the bar he built by himself from scratch, and very, very genrously he also let us enjoy a couple of drams of our own choosing.

The experience was even more amazing when Martin pulled out a bottle of the very recent bottling ”The Battle of Jutland” 11yo, at 64% ABV! Wow!

As you can see from this video an absolutely amazing experience and feeling to try this fantastic whisky at such a fantastic place! Then and there I felt so alive!

After this great experience and some lunch on the move, we headed for the last stop of our journey, which was the Swannay Brewery!. Truly a microbrewery. Their founder and headbrewer Rob Hill is a fantastically interesting and eccentric man and here his work has rightly been described as "Genuinely at the intersection of art, science and madness". Rob welcomed us with open arms and basically showed us the entire brewery inside out.

The best part of our visit to his brewery was when he ran off into one of the rooms in the brewery, asked us to follow him and then let us sniff all kinds of more or less extreme hops of all varieties. The most extreme had a nose reminiscent of curry and cheese! Before leaving we of course visited their shop to pick up some of their fantastic beer.

In the bar at the hotel we had already tried some of their beer, and since we already knew they produce some really good stuff we could kind of just buy anything, knowing they would all be great! Oh, by the way, Swannay Brewery and Highland Park Distillery will soon start with beer and whisky paring, so if you are headed to the distillery, don’t miss out on some great beer and some great whisky in combo!

Well friends, that’s about my whole story about this journey to Highland Park Distillery, and if we meet at some of the festivals in Sweden I am very happy to tell you some more about it if you feel like it! Oh yes, I almost forgot! I have som very exclusive news to share exclusively with you my friends and followers: During our visit to Highland Park Distilery it came to my understanding that later this year, there will be two (maybe three) Highland Park single cask bottlings launched in Sweden, that have been chosen exclusively for the Swedish fans of Highland Park! Who more than me longs for that moment?!

Anyways, big, big thanks to Martin and Dani for inviting me and Stefan to visit Orkney and Highland Park Distillery. An absolutely amazing experience… Also a special thanks to Johanna at Edrington! It was amazing and I can’t wait to see you soon and work with you all again! Sláinte!

Copyright © and All Rights Reserved on all tasting notes and text by SamuelWhisky and pictures likewise belong to SamuelWhisky, unless stated. If you would like to use any such material that belongs to SamuelWhisky or associated with SamuelWhisky, please ask by sending me an email to samuelkarlssonorebro[at]gmail.com
Upplagd av SamuelWhisky kl. 20:42 Inga kommentarer: