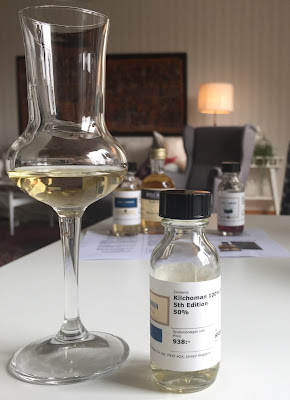 Dear friends and followers, thanks for stopping by to see what's happening in the world of SamuelWhisky! A couple of days ago I was very lucky to once again receive a package of samples from the nice people of Clydesdale (Swedens top importer and seller of whisky and other beverages).

This time the package contained samples (whisky and a Bramble Liquer) from the Islay Distillery Kilchoman only! Out of the latest release of their "Machir Bay" and their dito "Loch Gorm" and "100% Islay" I decided to devote todays blog-entry to the latter. Here in Sweden it will be released on the 1st of June

The Kilchoman 100% Islay has as you can all understand been produced with barley only coming from Islay and having been malted and peated at the distillery. The yeast is not from Islay (and of course not the barrels/casks) but other than that, it is all Islay! It has been matured in ex-bourbon barrels which were filled between 2009 and 2010, meaning that this whisky should be 5yo at its youngest and 6yo at its oldest. This is how Anthony Wills (Kilchoman Founder and Managing Director) describes the difference between this Kilchoman expression and the regular expressions:

"There is a clear difference between the 100% Islay range and other releases, the lighter peating level and maturation exclusively in ex-bourbon barrels gives the whisky a beautiful fragrance and balance (…) We expect that followers of Kilchoman will enjoy this latest Edition of the 100% Islay, the added maturation time compared to previous releases has given the whisky added depth and balance, we expect it to be a hit"

Well let's see if Anthony is right then shall we?!

Nose:
Holding the glass at a few centimetres from my nose I get a really soft mint with touches of something green, some kind of mint-ish and/or herby-ish leaves, or maybe I’m just thinking about the herb you put in a Mojito… (?) at the same distance there is also touches of very mature pear and a quite ashy smoke. Movning the glass closer, almost dipping my nose in there, I also get citrus, moving towards orange peel mingling with smoked vanilla and cucumber-water. This Kilchoman does not scream ”PEAT!” right in your face, but you can’t really not notice the peat, it’s definitely there and always in combo with other stuff, I guess what I’m trying to say is that the peat does not stand alone, if you know what I mean? Really mature for it’s age and that wee touch of new-spirit that has been in a couple of earlier Kilchomans is not in this one. So a taste maybe?! 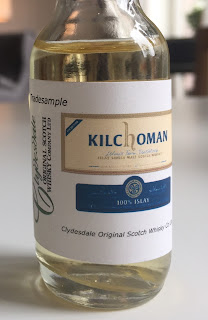 Palate:
Beginning on smoked salt! A wee bit of new-spirit in the beginning of the palate mixed up with something rubber-ish, but that quickly goes away and moves on to what is definitely a nice handfull of peat, and salt, but still very soft, so not really a fist of peat that slaps you in the face, rather it caresses your mouth. This soft peat is not bad of course, on the contrary, I’d say that this is one of the most elegant and sophisticated Kilchomans I’ve ever tried! Really smooth, and the interesting thing is the very smooth parts of the early aftertaste, not really showing the mint, but almost as if there had been som orangepeel macerated in the whisky for a short period of time, giving this whisky a really nice touch of citrus, also the cucumber-water comes back. The late aftertaste is a combo of dry and mouthwatering, very interesting feeling!

A big thanks to the nice people at Clydesdale Original Scotch Whisky Co. Ltd Great Britain for sending me this tradesample! Please follow SamuelWhisky on my Zuckerberg-page by going here, and on my bird-page by going here.

Copyright © and All Rights Reserved on all tasting notes by SamuelWhisky and pictures likewise belong to SamuelWhisky unless stated. If you would like to use any such material that belongs to SamuelWhisky or associated with SamuelWhisky, please ask by sending me an email to samuelkarlssonorebro@gmail.com Sláinte!

Visiting the Swedish Box Distillery to taste their next release!!!

Dear friends, followers and fellow whiskydrinkers! About five months ago, Hasse Nilsson, the Senior Brand Ambassador of Box Distillery, came to the pub where I do tastings once a month, to host a tasting himself, completely consisting of Box whisky. Not only did I have the wonderful pleasure to for once actually attend and enjoy a tasting (instead of ”just” conducting it), I was also informed that Box Distillery would soon invite a bunch of bloggers to visit the distillery, and I was told I was one of them! I was as you can all understand very happy to hear these great news and said to Hasse in a typically swedish insecure way: ”But my blog is so small... Is this really true?!” upon which he replied ”That might be, but you are one of the bloggers we would really like to pay us a visit!”

So, last weekend, the time had finally come for us to visit the distillery, AND also to taste their next release, "The Explorer"! Nine bloggers including myself travelled from our respective hometowns to Stockholm and Uppsala, where we were all picked up by Hasse, and the Distillery Manager/Master Distiller Roger Melander himself and went on a road trip to the region where the distillery is situated.

Now, Box Distillery (producing whisky since 2010) is one of the worlds most northern distilleries producing both peated and non-peated whisky. On the site of the distillery, production of material for wooden boxes took place, hence the name, Box. As you can see from the picture below the distillery (in the brick building) kind of looks like a box, although a really good-looking one, right? (To check out what critics from the business have to say about Box Distillery please read here, and for a 360-tour of the still-house please click here)

After many, many, many hours by car (having a wee “car-tasting” and a fun music quiz as we went along) 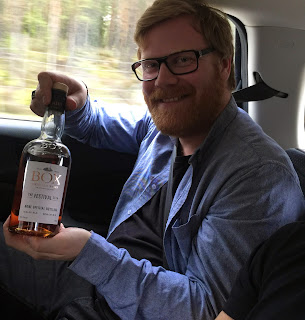 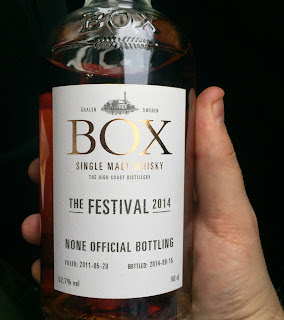 We all sat down in the restaurant and enjoyed a really nice three-course dinner after which we were invited to a tasting. 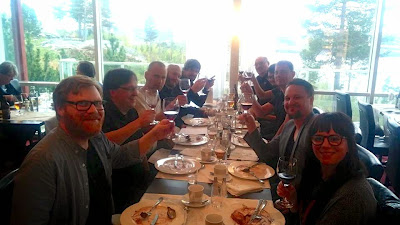 But, no tasting of Box Whisky is complete without a proper and super informative/nerdy lecture from the Distillery Manager on the how-to of whisky production in general, and the art of producing Box whisky in particular. 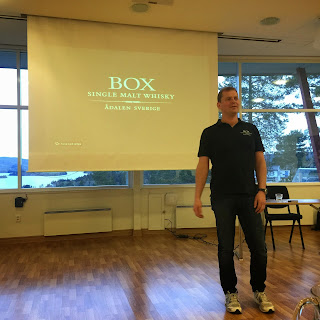 After a while our mouths started watering (or rather drooling) and it was finally
time for the tasting, a blind tasting! 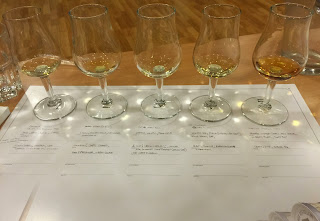 The tasting consisted of five whiskies, all of them of course from Box. Out of these five, each one of us was assigned the mission to choose two whiskies of our liking, which was not very easy, believe me! We tasted (although not knowing it at the time) 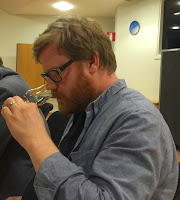 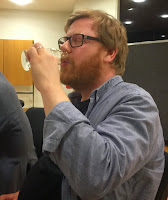 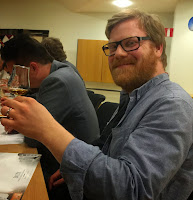 Anyways, from this line-up I chose number 3 (which was sooo good!) and 2 as my two favourite whiskies, and together with the other bloggers we actually purchased a cask of bourbonmatured non-peated whisky from Box that will be ready to bottle in three to four years time. And you should really think about doing the same (following this link).

After the tasting, the hotel bar sadly turned out to be closed, but as you can imagine, in some magic way the party went on any way!

The next morning, after a couple of hours of sleep, some breakfast and a half hour trip by car, we finally arrived at the distillery! If I say that we received an ordinary distillery tour, well then I wouldn’t tell you the truth, cause it was definitely a VIP-tour! We did everything you can imagine. We checked out the mill. Got distilling at Box Distillery thoroughly explained

we tasted the wash, which was amazing and in a kind of “wheat-beer”-style, sparkling with a taste of fizzy lemon and lime 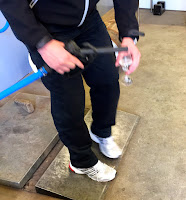 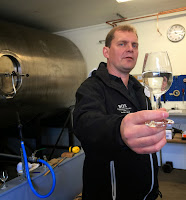 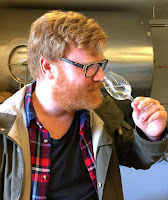 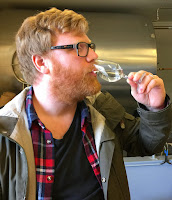 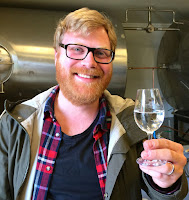 took a tour in the two warehouses filled with maturing whisky 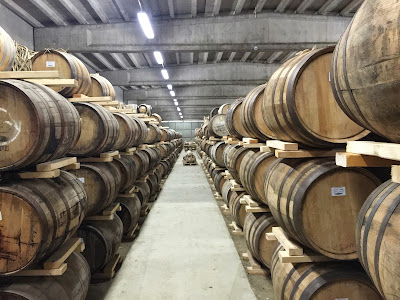 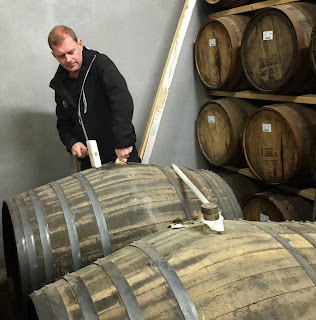 and what all the bloggers of course looked forward to, yes tasting Box whisky straight from the cask!

We started out with tasting a non-peated whisky maturing in a first fill oloroso sherrybutt number 2013-7 of 500 litres. The whisky was at around 61,5% ABV and at the age of 2 years and four months old. It tasted amazing and so smooth, at least like a 10yo! 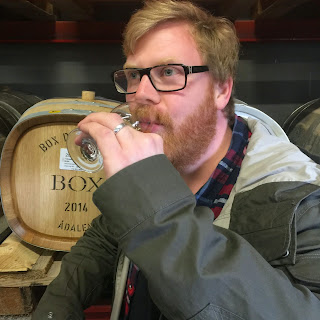 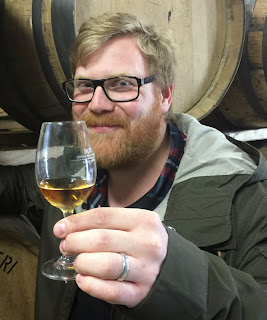 Then Roger let us taste a peated whisky from a bourbon barrel which he described as something like “peat gone mad”, but let me tell you friends, it was definitely alright! The tasting session ended in a very exciting way, a non-peated whisky that had first been matured for 3 years in a 40 litre bourbon barrel and then been transferred to an as close to square-shaped barrel (!) as possible, made out of Swedish oak, for a final finishing of seven months. 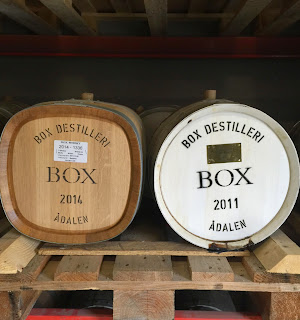 This particular barrel was, as most casks/barrels used by Box, of course produced by Swedens only cooper in an homage to Box Distillery, trying to make something funny and extraordinaire associating to the name “Box” J

As you can all understand, we had a great time and I felt really sad to leave the distillery… But, we will of course go back very soon to follow the progress of our maturing whisky! Tasting note of "The Explorer" will come very soon, so watch this space. Finally, a BIG thanks to Hasse, Roger and all the other great people at Box Distillery for arranging such a nice visit! 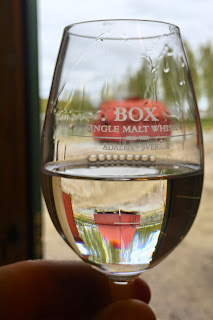 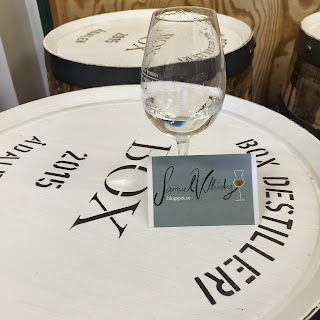