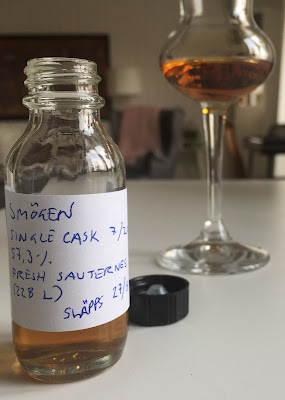 Today I bring you a review of the coming release from the Swedish west coast distillery, Smögen! As you know by now they only produce peated whisky (45 ppm). During the Gothenburg Beer and Whisky festival I was very lucky to exchange a couple of words with Pär, the distillery manager/master distiller, to see if there was anything in particular that he wanted me to review. And of course there was, a single sauternes cask (7/2011) at the age of 4 yo. It has of course spent all of it's time in the sauternes cask, so no silly finish! Here in Sweden it will be released on thursday and international buyers can find the products of Smögen Distillery here

Nose:
The top layer is sweet and sour in an extreme mix! I imagine something like fermented dark raisins resting in freshly squeezed limejuice… (no wonder the raisins would ferment if you leave ’em resting in juice just like that… J ) very intriguing! Below the top layer I pick up something reminding me of a mix of extremely ripe plums in sugar syrup, damp leather, bicycle tire, green marzipan and some very, very dark and fat peat. Very earthy indeed… There’s also roasted hazelnuts and maraschino cherries, actually, this dram is quite christmas-y! Believe me people, I could nose this one forever! 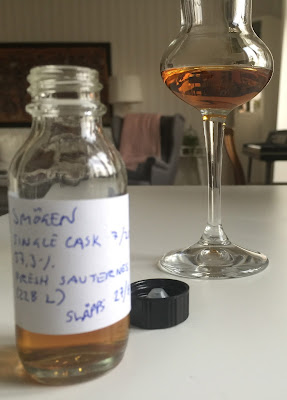 Palate:
OOH    M-Y    G-O-D! I just have to buy a bottle of this one! The beginning of the the palate is soo smooth, sugar syrup-y, sugar candied dried figs, dark rasisins, chocolate sticky-cake. Simly amazing! After swollowing, everything is slowly moving on into a quite powerful kick of very dark and viscous/sluggish peat. Getting more and more dry, not just the tounge but even my throat! This is definitely, without a doubt, THE best Swedish whisky I’ve had so far, nothing else comes close so the other Swedish distillers really have something to be inspired by here. In fact, this is one of the best whiskies I’ve ever had!

I can’t believe this is ”only” four years old, so mature and full bodied, and it has spent all of it’s four years in a full sized 228 litre cask and I would describe the whisky as fully grown up. I can’t imagine what would happen if you let it rest in the cask for even longer…

Sláinte and a big thanks to Pär for sharing a sample of this one! Please make sure also to follow my FB-page by going here, and my twitter-page by going here. Copyright © and All Rights Reserved on all tasting notes by SamuelWhisky and pictures likewise belong to SamuelWhisky unless stated. If you would like to use any such material that belongs to SamuelWhisky or associated with SamuelWhisky, please ask by sending me an email to samuelkarlssonorebro@gmail.com 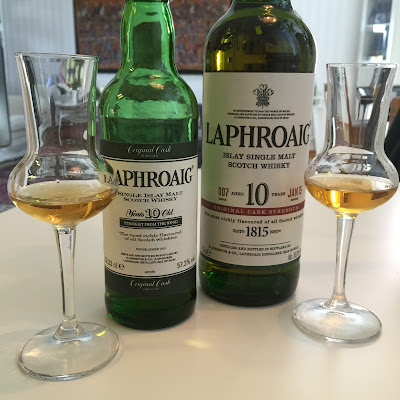 Dear friends and followers! SamuelWhisky is back after a one month of summer break, although in retrospect it has not been that much of a summer weather, at least not here in Sweden… Anyways, today I will do something I've been longing to do for a looong time; put the newly released Laphroaig Cask Strength batch 007 at 56,3% ABV head to head with the so called "Green Stripe" Laphroaig Cask Strength at 57,3% ABV. The Green Stripe was the original and first version of Laphroaig CS to ever be relased. Since then it has changed design three times.


So, I will put the latest release of Laphroaig CS, batch 007 which was released in honor of Laphroaigs 200th anniversary, against the old Green Stripe (released around 2005 I think). The difference between the two is only the ABV. Usually the Green Stripe is remembered among fans as a real peat monster, and it is said that the versions coming after are more accessible to "the big crowd", whatever that means… Lets find out by starting off with batch 007! 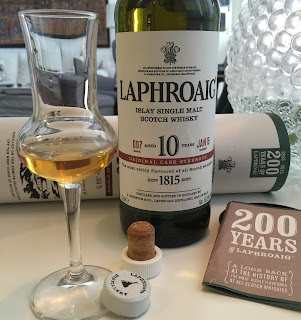 Very seasalt-y! Huge amounts of ”fresh” leather, or whatever the opposite of old leather is… we also got quite a big load of roasted bitter almond, and of course LOTS of peat, almost liquorice-infused peat in fact (or the other way around). The peat is not smoky though, rather drawing on ashes, or totally burnt out and cold peat. With a really deep nosing, and really looking for it, I do get quite a lot of dried lemon peel. Beautiful stuff, could nose this one  forever… 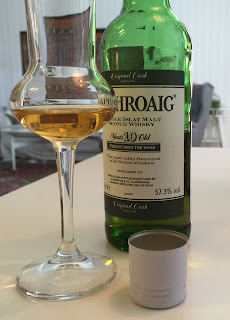 Green Stripe nose:
Wow! This old expression boasts of vanilla, huge amounts of it! I didn’t even pick that up in the 007… The peat is definitely more restrained in the Green Stripe and not as ”warm” and seasalt-y-ish as in the 007. The dried lemon peel is here too but more drawing towards dried orange peel, or citric peel in general, mixed up with full-fat (unwhipped) cream. On the other hand, in this one there is a more citric note in general that together with all the vanilla sort of surrounds or embraces everything else, compared to the 007 where the peat is sorrounding everything, interesting…

007 palate:
Oh damn! This is soo intense stuff! Extremely salt, not liquorice but rather actual salt! Not just on the front of the tounge but covering my whold mouth, throat, everything, almost like as if John Cambell himself decided to pour some salt directly into the bottle! Under the layer of salt is a quite agressive peat mixed with liquid smoke and citrus-fruits/citruspeel… In the layer below I get overripe pear and vanilla. This is incredibly intense and really warms my chest, I’m not kidding people, it really starts a warm almost fire-y feeling in my whole body, my forehead starts to sweat… wow! Ending with a pleasant mix of sweet and sour.

Green Stripe palate:
These two are really interesting to compare! The Green Stripe starts off really, really short on the salt, just for a micro-second, and then comes some huge vanilla, fudge and cream, almost vanilla ice-cream in fact, very more-ish! The salt in this one does not taste of actual salt, rather like sweet and soft liquorice. In general or overall the Green Stripe is softer or perhaps calmer than the 007. The Green Stripe does not at all have the same ooumph, don’t get me wrong, it’s a ”punch-in-your-face” kind of a dram but not really in the same way as the 007… Ending with peated milk chocolate and traces of cold coffee, nice!


To sum up, both versions are of course great expressions or interpretations of Laphroaig and it’s really hard for me to choose one over the other. Today however, on a quite warm and sunny day here in Sweden, I will go for the Green Stripe with its overall soft character (despite its one percent higher ABV than the 007). On a really rugged or cold winters day I would definitely go for the 007. After all it sure is very much depending on the occasion and the context.