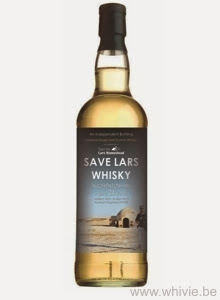 This whisky, which is the second bottling in the series,  was bottled in celebration of the Star Wars related project 'Save the Lars Homestead' which some of you folks out there most likely have heard about. If not, here is some info from markdermul.be

”The Lars Homestead is the fictional home of Luke Skywalker in the Star Wars Saga. The actual structure is sitting in the Tunisian desert, near Nefta. The original dome is long gone (Star Wars was shot there in 1976), but for the Prequels, they rebuilt the homestead in the exact same spot at the turn of the 21st century. That building had suffered badly from the climate and in 2012, six fans from around the world, led by Mark Dermul, took it upon themselves to restore it to its full movie glory”.

Feel free to learn more about the project at savelars.com

Now to the whisky itself which is from single bourbon hogshead no. 4905. The hogshead gave 100 bottles so it’s very limited (and now seems to be sold out). It was distilled in 1989 and bottled in 2013. A big thanks to Mark ’The Toshan Man’ Dermul for sending me a sample! I have not tried that many Auchentoshans so this will be exciting!

Nose:
Very soft and fruity, mostly on citrusy fruits. There is faint touch of lemon peel, elder flowers, some pear and almond flakes. Also there is lots and lots of vanilla and some whipped cream. Also something I’ve never nosed in a whisky before, namely eggnogg (!) which is really nice at this time of the year. There is also some touches of raw sugar but that is probably in combination with the eggnogg… It seems very light on the nose and the alcohol is very mellow although it’s 54,1%

Palate:
Almost nothing of the citrusy things from the nose comes through on the palate, perhaps some touches of very soft lemon curd. More evident is the big vanilla and the cream and there is LOTS of it! Mmm… Actually I’d say that the eggnogg is there too and interestingly enough some coffee flavours, cool. There is also marzipan and a little warm zing from the alcohol comes through but in a very gentle manner. This is very savoury and more-ish, warming and with thick, fat flavours. Mark and Manny, you sure picked a great cask of Auchentoshan so Slainthé and a Merry Christmas to you and all my readers! 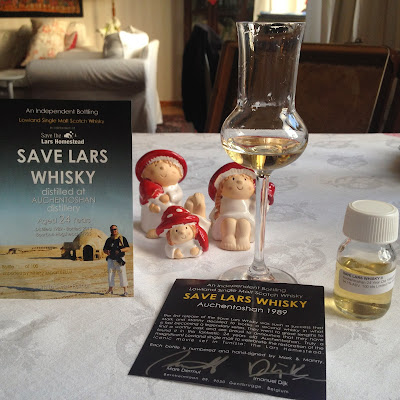 During the Örebro Beer & Whisky festival this weekend I had the great privilege to receive samples of two coming bottlings from the swedish independent bottler ’Svenska Eldvatten’ (’Swedish Firewaters’)! A big thanks to Peter and Tommy for that! The two whiskys were meant to be released today at the swedish state monopoly liquor store but fans shall have to wait for a few days (around the 10th december). I am very happy to be the first blogger to taste these two! Ok, this is very exciting for me so hang on, here we go! 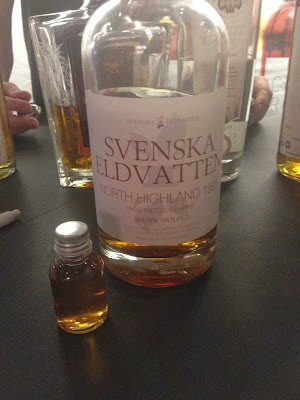 The first one was distilled in March 1995 and bottled in October 2013 and matured in first fill sherry butt no. 233123. The cask gave 428 bottles. Somewhere in the crowd during the festival I heard that this whisky comes from a distillery that rhymes with orangie. However, the guys at ’Svenska Eldvatten’ did not expose anything when I begged them to tell me… Here is the link to the bottle on the swedish state monopoly liquor store (it says that it's sold out but that is not correct)

Nose:
The first thing I get is a very citric or acidulous touch, interesting! Elderflowers, summer apples, fresh rhubarb, so very excotic, even dried banana (kind of like nature candy). Lemonpeel and also something like ”pear soft drinks”, very fruity. Below that layer is soft vanilla, almost creamy, lemon curd and marzipan, but the main things on the palate is the excotic/fruity touches. I think it’s very interesting that the first things that come to mind are scents that I associate with bourbonwood matured whisky (not in a bad way of course), which is a bit strange since it’s sherry matured, well, my nose must be wacky after the Örebro Beer & Whisky festival… When I come to think of it there is quite a lot of dried raisins but rather sultanas than dark raisins. Hmm, exciting! Time to see what’s on the palate!

Palate:
Absolutely gorgeous, and strong! Starts of like the nose on the citric or acidulous side of things, but kind of in combination with a quite fast journey or flow into the vanilla, the marzipan, then dried figs, and actually dried dates, the sticky and a little bit dry inside of the dates. Not the bitterness of grape seeds (red grapes) when you bite one, but a little bit like the dryness of them, and of the white in the banana peel, once again of course in a good way. I’d say that there is more sherry influence on the palate than on the nose. This is a very interesting whisky and I’ve never had anything quite like it, wonderful! 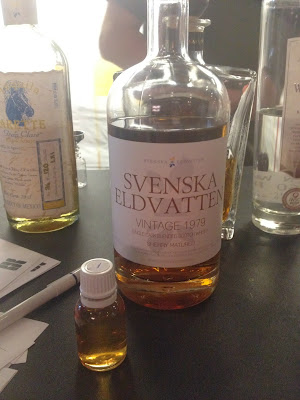 The second one is a very special whisky. It is a single cask blended scotch, that is raw-spirit/distillate of grain and of malt, blended at birth into a single sherry butt no. SE01! It was distilled way back in 1979 and has rested in the cask for 33 years (!) until October 2013 and the cask gave 197 bottles. Here is the link to the bottle on the swedish state monopoly liquor store (it says that it's sold out but that is not correct)

Nose:
Immediately when I pour a little dram of this oldie in the glass I get very soft and darkish sherry scents in the room. My nose a little distant to the glass I feel that the grain is there but in a soft and very integrated way, not like in budget blends when the grain usually screams alcohol. No no, this is very very soft grainy notes, classy and you can tell that this is an oldie and a single cask for sure. Nice! Then something I’ve never nosed before in a whisky: a slight touch of chantarelle mushrooms, cool. Vanilla ice cream whipped together with young rhum, perhaps also rhum-raisin ice cream… Going deeper with the nose in the glass the center is citric or acidulous together with fudge candy cubes and something that reminds me of sweet liquorice. Mmm, this is a very deep whisky, the one you could nose for ever…

Palate:
Once again, absolutely gorgeous! The stages of the taste moves seamless into one another. Starts of on soft sugary figs, elderflowers, yes, in this one too, but now in the form of lemonade. Then moves on into a sugary taste kind of like maple syrup or from the birch-tree in the summer time. Quite a lot vanilla, white chocolate, raw sugar (lump of sugar) and something like a mix of vanilla custard on a birthday cake and whipped cream with lemon peel in it. Oh yes, give me more : )

For the folks living in Sweden, don’t miss out on these two beauties. The bottlings from ’Swedish Firewaters’ that I’ve tasted so far have been very good, but these two are just grand! 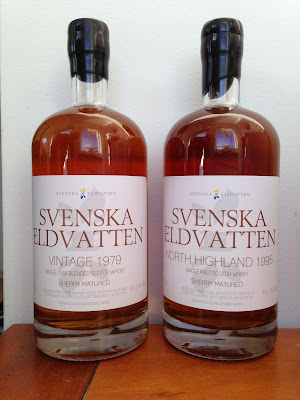