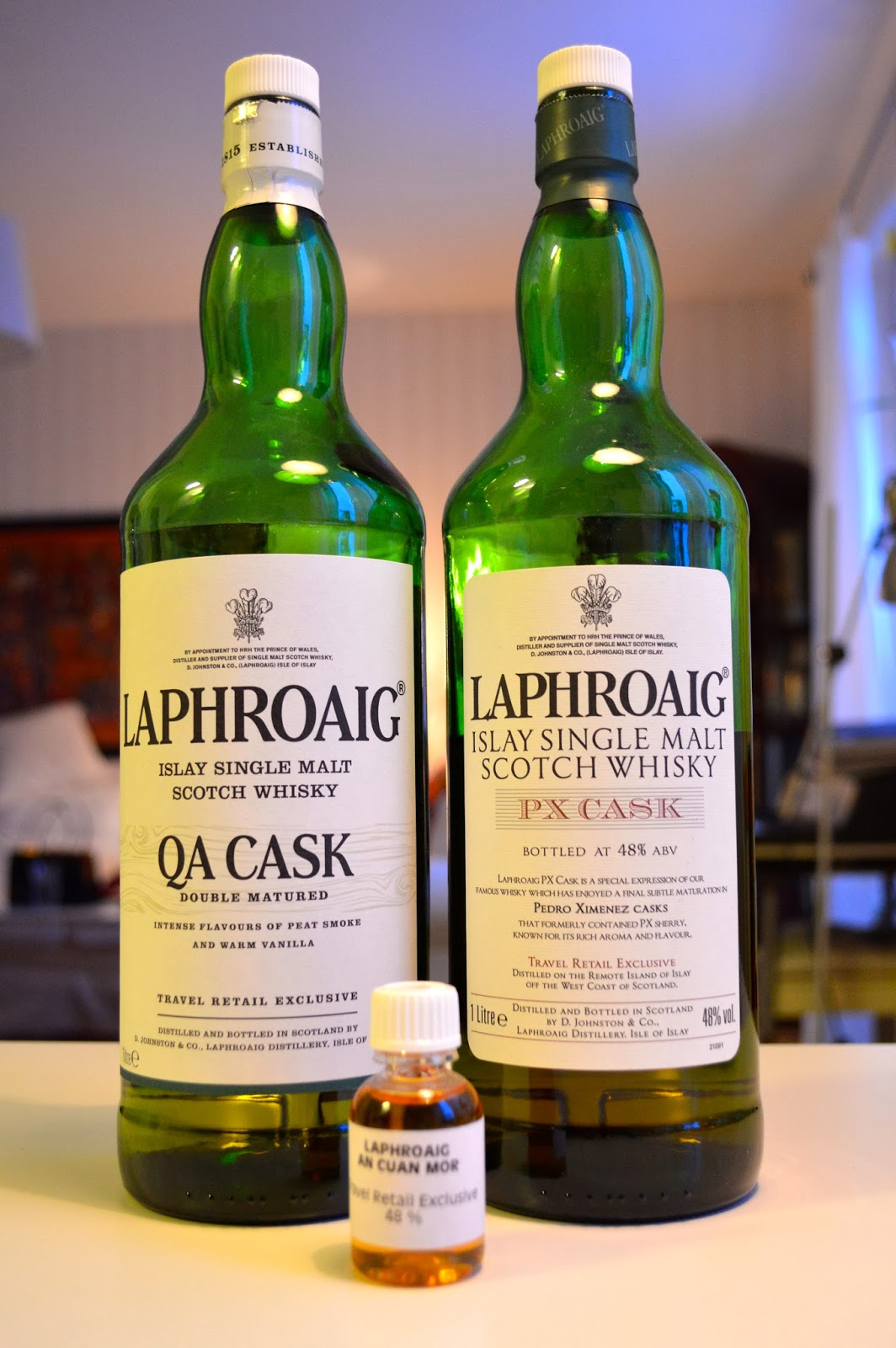 ’QA Cask’ was released in 2012 and holds 40% ABV. It has had it’s first maturation is in ex-bourbon barrels and then a final maturation in (new?) charred American white oak casks, there of the name QA (of course meaning Quercus Alba). I don’t know the age. It goes for arond €48 for a litre bottle.

’An Cuan Mór’ was released in 2013 and holds 48% ABV. The name means ”The big ocean”. It has first been matured in firstfill bourbon barrels and then transfered for a final maturation in European Oak (which I interpret as oloroso sherry butts). The age is around 8-9 years old and goes for around €95 for a 70cl bottle.

’PX Cask’ was released in 2012 and holds 48% ABV. The PX Cask is sort of a version of the Laphroaig Triple wood but instead of final maturation in oloroso sherry butts it has had a final maturation in Pedro Ximinez sherry casks. Hence the maturation as follows: first first-fill bourbon barrels, then quarter casks (around 125 litres bourbon barrels) and then finally matured in PX casks. The age is between 6-12 years old and it goes for around €60 for a litre bottle.

Big thanks to Jennie for the An Cuan Mór sample, and a big thanks to Dani at Edrington for the PX ”sample”. The QA was a gift from the family. Ok let’s try them!

QA Nose:
Starts of on a mix of very soft peat and vanilla, pear, also there is a hint of wet burnt wood. Quite simple but nice nose. Slightly ”watery”. Sadly I don’t have the standard ten year old as a reference but I’d say this is very in the classic style of Laphroaig.

An Cuan Mór Nose:
Hmm… Interesting! Some notes I’ve never felt in a Laphroaig before! Adding to all the elements from the QA (except the watery-ness), and compared to the QA, which I feel is very classic, at least on the nose, this one is sort of more focused, perhaps a little closed, but there is also some ”metallic” notes, maybe Iron and saltiness, but mostly this one definitely has more wood/oak influence, not more on the vanilla though but rather more on the darker notes. There is also in the distant something very close to dark raisins but I would’nt say this one has a in general ”sherried” nose. Also marzipan and something perfumy… Quite complex actually, this will be exciting to taste!

PX Nose:
Mmm, the nose of the PX is definitely complex on another level, compared to both of the previous. No wonder since the three types of casks. This one has more of the heavy, dark layers. Dark, what seems as almost dry-ish raisins, dried figs, salty-ness, almost roasted salted almonds (or am I just getting hungry?) This one also has a really big peat with a stronger character than the previous two! Oooh, my mouth waters, let’s taste them!

QA Palate:
Initially there is peat, but not sweet and not salt, just peat. Wait… here comes the sweetness, mostly on vanilla. Then we have a little bit of the wet burnt wood that was there on the nose, almost a little ashy… Then comes just a little bit of dryness, a little herby… A little ”thin” on the palate but not watery, not at all. I thought this one would have more of wood/oakyness/power due to it’s final maturation in (new?) charred casks, but no… Also let’s keep in mind the 40% ABV

An Cuan Mór Palate:
Mmm! Oh wow, that was powerful! Besides the power from the higher alcohol of course, there is a really oaky power here. Wonderful! I would’nt say that there is very much of classic european (sherry) oak flavours but rather something like ”forest flavours” and most of all, MORE PEAT! Of course it’s darker in style than the QA but there is also more salty-ness, more dryness and it really clings on to my palate, the tounge itself. Some very citric apple-cider, almost sparkling flavours swishes by in not more than half a second… This is an exciting palate for sure!

PX Palate:
Mmm! This is such a good whisky! It really starts of on the sherry influence, it’s there right away. The balance between peat and sherry is perfect. Quite sweet in the beginning, mostly on sugar-coated dark raisins, dried figs and then quite fast comes a very nice dryness, that as in the An Cuan Mór REALLY clings on to the tounge… It calms down after say two to three seconds, really opens up in my mouth, lighter flavours appear, there is pear, vanilla and a soft sting from the alcohol. The journey of flavours in this one is beautiful and it’s hard to capture them all… That was a great job, well done!

To sum up:
For me the PX is definitely the winner and I felt that right away when the first drops hit my tounge. You can also tell, not just by knowing the age but by flavour, that the PX is the most complex and mature out of the three. But I suppose it’s all a matter of if you like an emphasis on the bourbon flavours and power, then I’d go for the An Cuan Mór, but if you like a sherried style Laphroaig then go for the PX. In my humble opinion, from memory, the PX is also better than the ’Triple Wood’ but I think I may have to compare them to be sure…

Slainthé and thanks for taking part of my tasting notes! P.S If you are on Facebook please like the page for my blog here

Please check out my third tasting note as a guest-blogger at ilovewhisky.se (in swedish)! 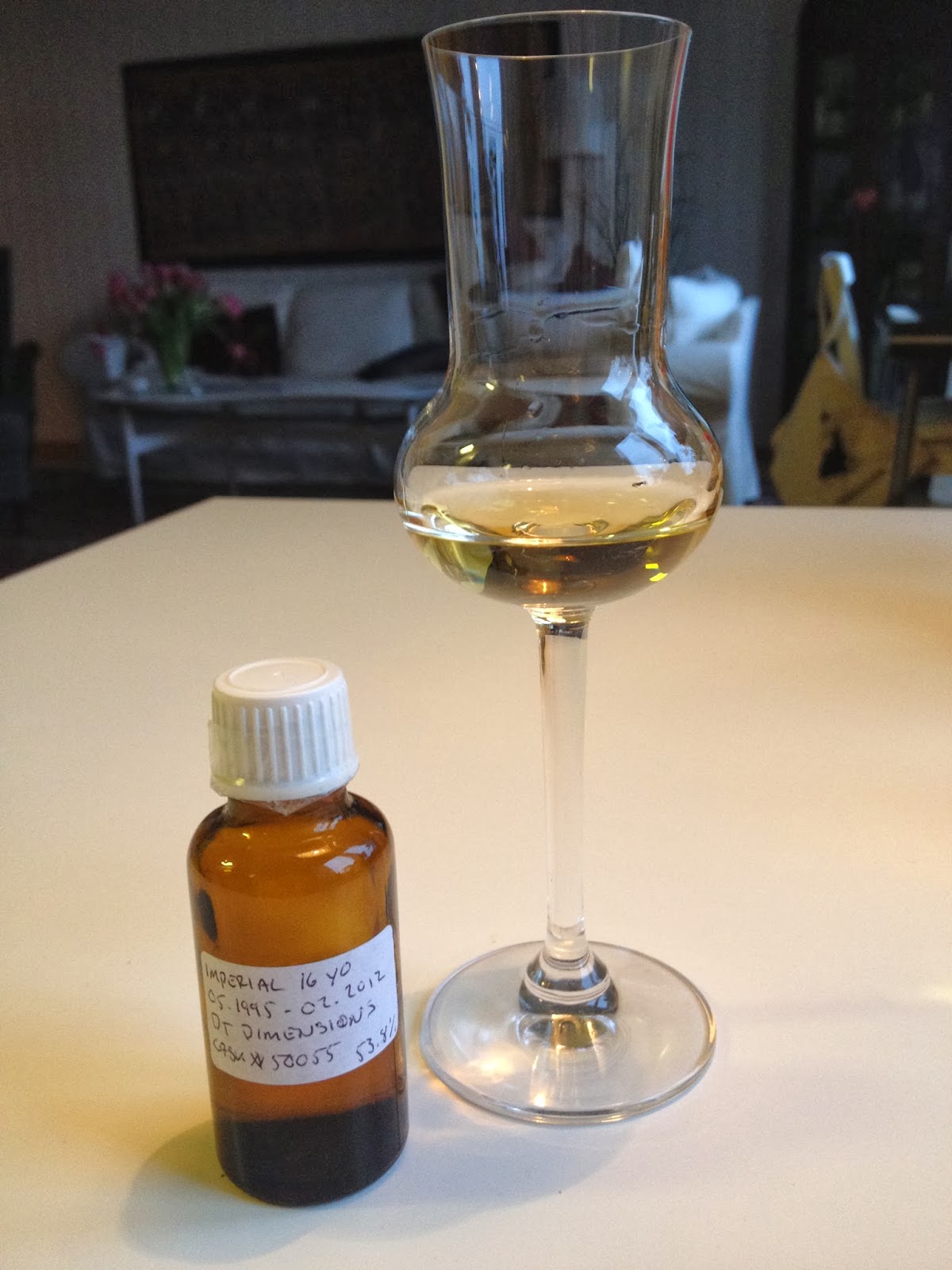 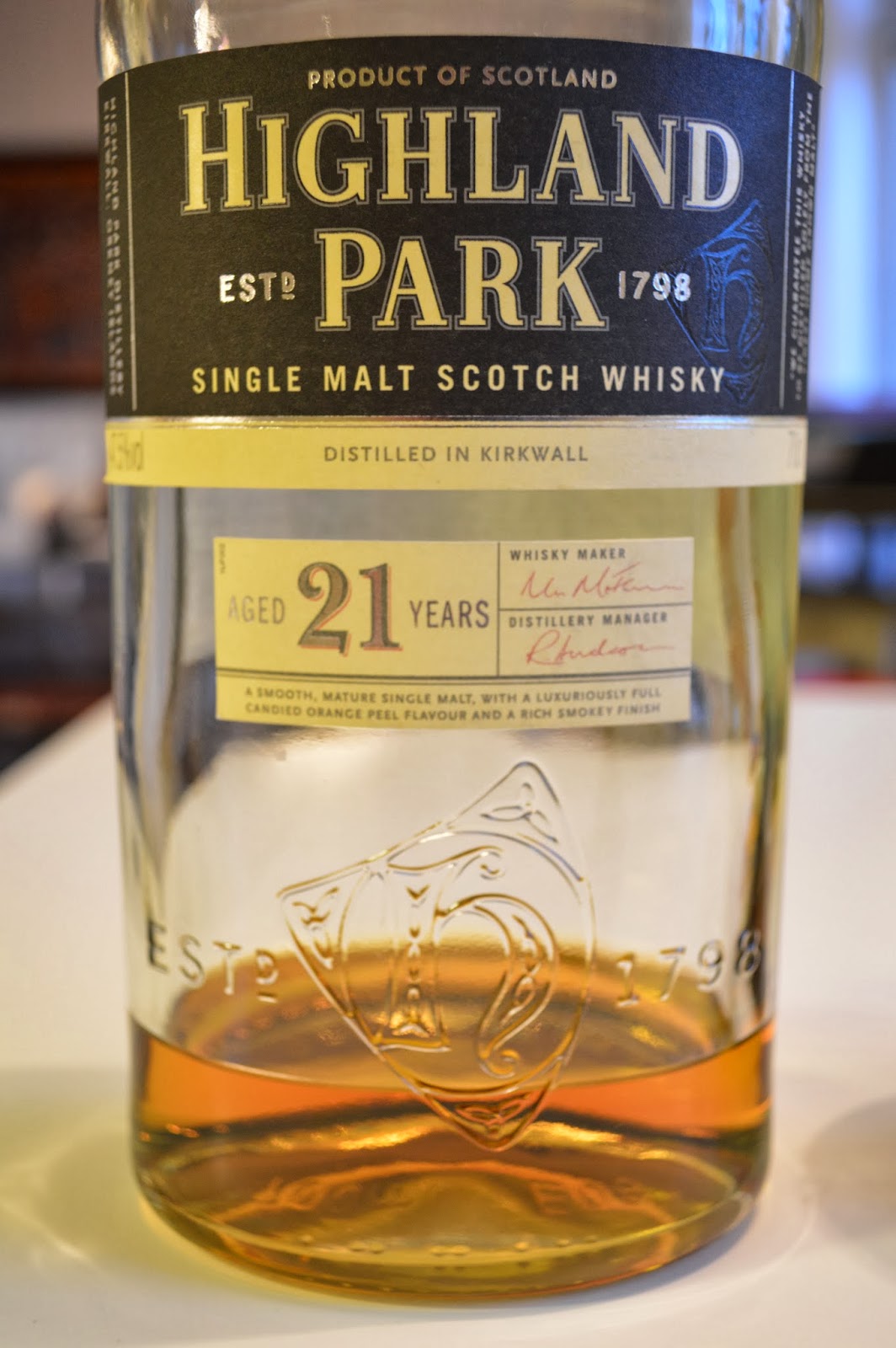 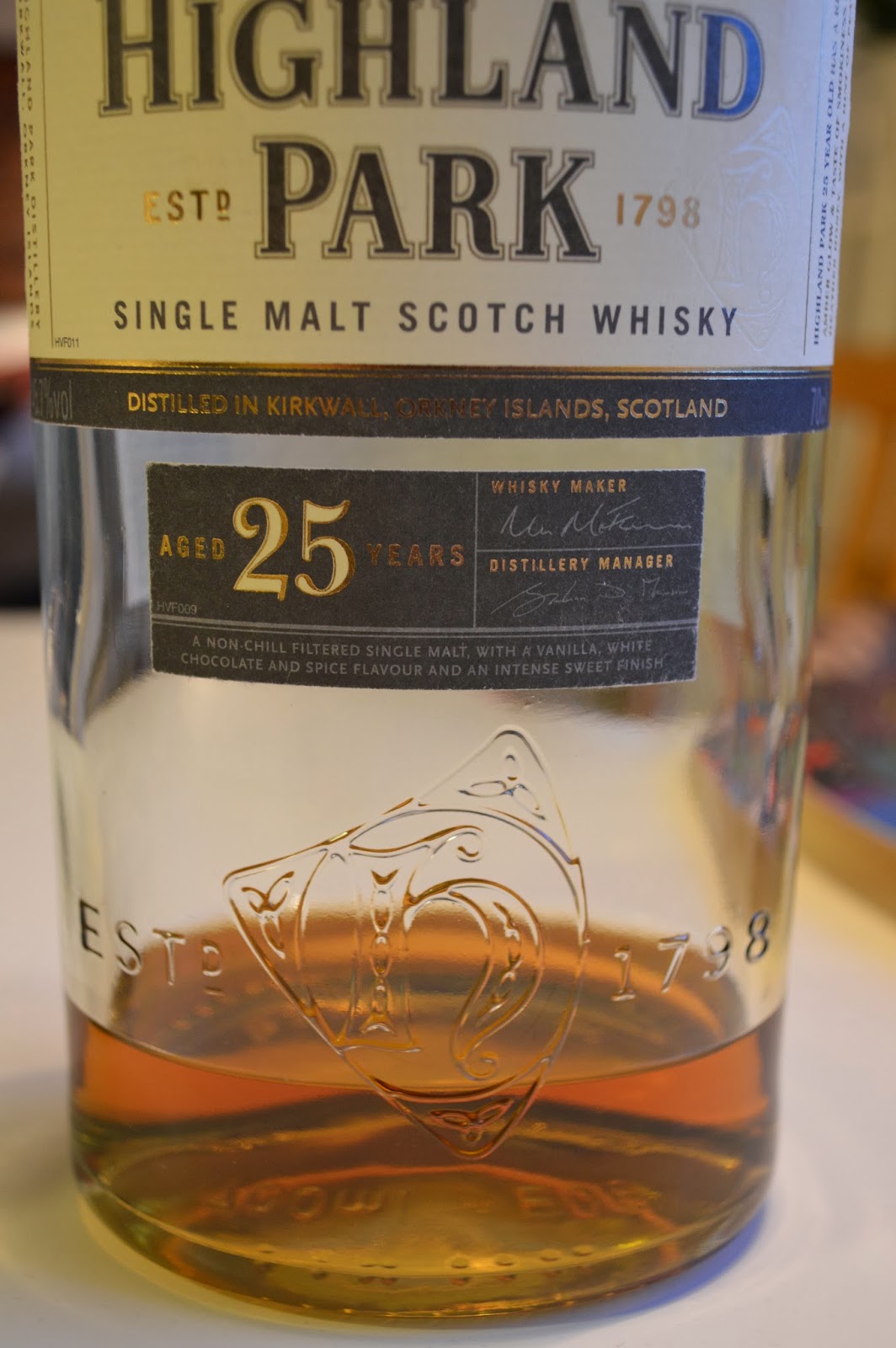 Let’s do something fun and compare two Highland Parks, namely the 21yo and the 25yo! The first Highland Park I bought was the 18yo and that was a looong time ago. It took a while for me to try HP again but when I did I really fell in love with it, not to wonder since it was the 30yo! : ) Anyway, I haven’t really done tasting notes on any HP but now the oppurtunity has come thanks to some ”samples” from Dani at Edrington. So big thanks to you Dani!

The info I have managed to source from the Highland Park website is this: The 21yo is predominantly matured in american oak seasoned with sherry. The 25yo is matured in up to 50% firstfill sherry casks, predominantly european oak is used. The proportions other than that seemed a little hard to find out so I sent an e-mail to Martin Markvardsen asking for some complimentary info and this is what he replied:

”21yo American cask seasoned with sherry, 20 % first fill... the rest of the casks used are  predominantly American oak [bourbon casks] but there are some Spanish casks used as well (…) 25yo all European oak, with 50% first fill dry oloroso cask”

Thanks Martin for that info! Okey, let’s compare them!

21yo Nose:
The basic nose on the 21yo is sherry, although quite a proportion of the casks used are bourbon casks. Not ”in-your-face-sherry” but rather soft and elegant with an emphasis on sultana raisins… There is something in there that reminds me of oranges (kind of zesty) and chocolate, also there is brown sugar and quite a lot of vanilla, finally something like red apple-peel. Just a little bit of peat. The balance between these things are incredible!

25yo Nose:
Turning to the 25yo you really get a lot deeper sherry notes, the difference between them is striking actually. Here we have dark moist raisins, a mix of fresh and dried figs, and dates with dark honey. The orange is there to, in the very center of everything, but this time it’s really citric and calls for your attention. Going from glass to glass when nosing I’d say that the peat is quite a lot more evident in the 21yo than in this one where it more tamed and has calmed down…

21yo Palate:
Mmm, hehehe, I can’t help my self from laughing out loud cause this is such a ridiculously good whisky! It is so balanced that it’s even hard to describe, but a lot of ”dark” flavours that quite fast move on into some kind of raw-sugar-coated-dried figs if there ever was such a thing… Very sweet but still medium-dry if you know what I mean. The vanilla is warm and elegant, this whisky really takes care of my tounge. Beautiful

25yo Palate:
Hehe : ) This one too is incredibly good! More full-bodied. Here we really have big, dark, moist, raisins and dried but still juicy figs… It it so soft that it’s unbelieveable. You can’t even feel the alcohol… Drinking this nectar feels more like drinking a mixture of oloroso sherry, whisky, dark slowly flowing liquid honey and raw-sugar, than actually drinking whisky. It’s crazy… The peat is barely there. After having tried the 25yo I really get what people mean when they talk about the ”heather honey” of Highland Park. Absolutely beautiful…

To sum up the 21yo and the 25yo are both great and do have their own qualities. As you can see in the picture below the color is almost the same although the 25yo is bigger on the sherry. If you want a great balance between sherry influence and soft peat then go for the 21yo, if you want a more full-bodied but still soft sherry bomb then go for the 25yo. But please, don’t miss out on them! If you have the oppurtunity, then do try them both. If I had to I'm afraid I couldn’t possibly choose between them… Slainthé!

Following the success of the very special release Vintage 1979 Single Cask Blended Scotch, here comes once again another very special release and quite rare composition of whisky from 'Svenska Eldvatten' (Swedish firewaters)! Their latest bottling of whisky is a Single cask of blended malt scotch, and it's sherry matured! As you all now blended malt (used to be called vatted malt and) means that at least two malts from separate distilleries are mixed together. In this case, as far as I have heard, malt whisky from six distilleries have been used for this composition, and here comes the quite rare part, were blended together "at birth", that is at filling (!) The vatting has then be matured for nine years in a sherry butt with the number #SE02. It was filled in August 1994 and the whisky was then bottled in October 2013 and gave 619 bottles.

A big thanks to Peter and Tommy for being so kind to share a sample during the Linköping Whisky Expo! For swedish fans this bottling is available here. Ok, let's try it and see if this is as good as SE-bottlings usually are...

Nose:
Almost some kind of rhum-y vibes, or rhum-raisin, in combo with vanilla ice-cream... hmm... also there is... apple-pie and vanilla cream. I'm thinking also of baked apples and pistachio crème (the filling in cinnamon buns). What is this, am I nosing some kind of dessert or fika?! : ) Also there is actually, when I nose really deep in the glass, some quite salty licorice infused with lemon, cool. Also red "ferrari bilar", light touches of swedish snus and finally white chocolate, no I'm not crazy it just a VERY interesting combination! Let's see how it tastes

Palate:
Starts of on something salty, then fast over to chocolate-chip-cookies and then swooosh, within a second off and away to something lemony, citrus peel. Straight down and warms my chest. Wow, that was a fast journey! It's to bad that once you've tasted a whisky you can never go back to your first experience of not having tried it, you can never forget you first impression... Mmm, the aftertaste bids creamy but quite dry vanilla, the rhum-raisin is there and somehow the pistachio crème too, sugary finish. This whisky was a completely new experience for me, very interesting and exciting combinations! You've done it againg guys! Slainthé 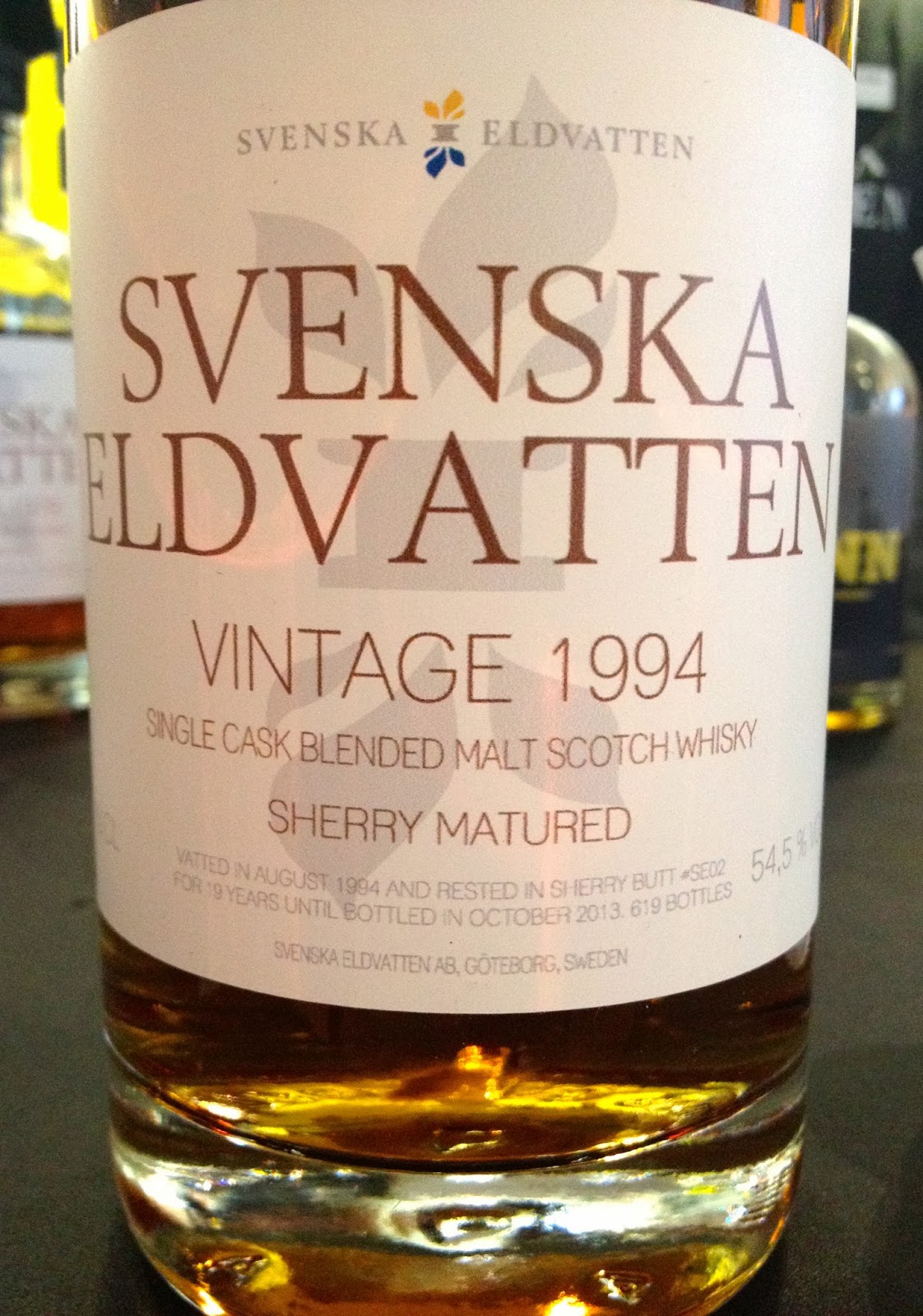