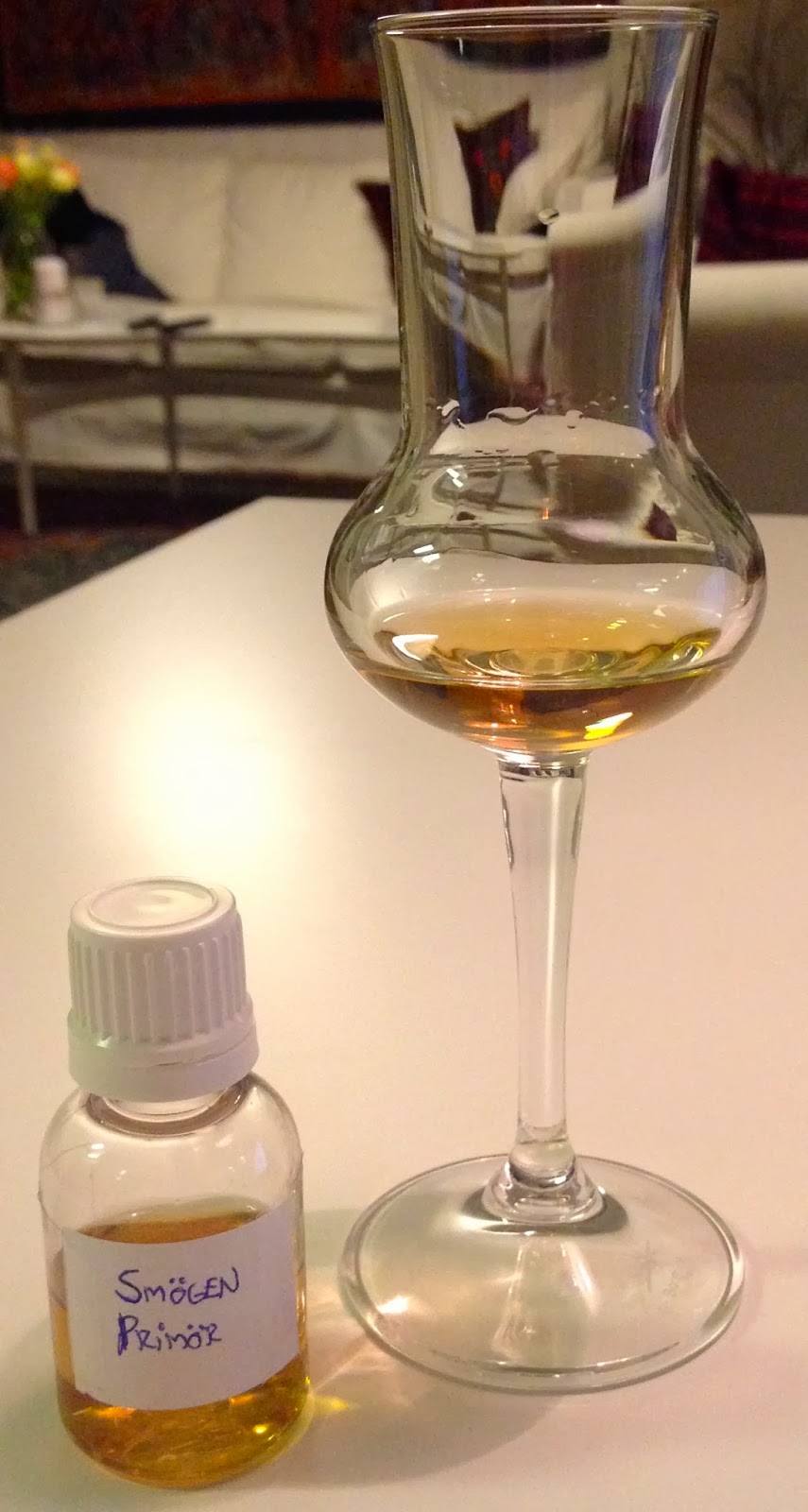 Yay! On the 13th of March, the day after tomorrow, swedes will finally be able to purchase yet another swedish Whisky at the state monopoly ’systembolaget’ (through a web-release)! Smögen Whisky, founded in 2009 and located on the west-coast of Sweden, is launching their first whisky which is a three year old composition of nine casks made out of european oak. One of the casks was a 225 litre ’Barrique’ that previously held Bourdeaux-wine, the remaining eight casks were new charred 110 litres casks so this should be interestin. The barley is peated to 45ppm. The batch resulted in 2188 bottles out of which 1600 goes to the state monopoly.

I am very grateful to Pär Caldenby, the owner and master distiller of Smögen, who very generously shared a sample, during this years Linköping Whisky Expo. Thank you Pär! 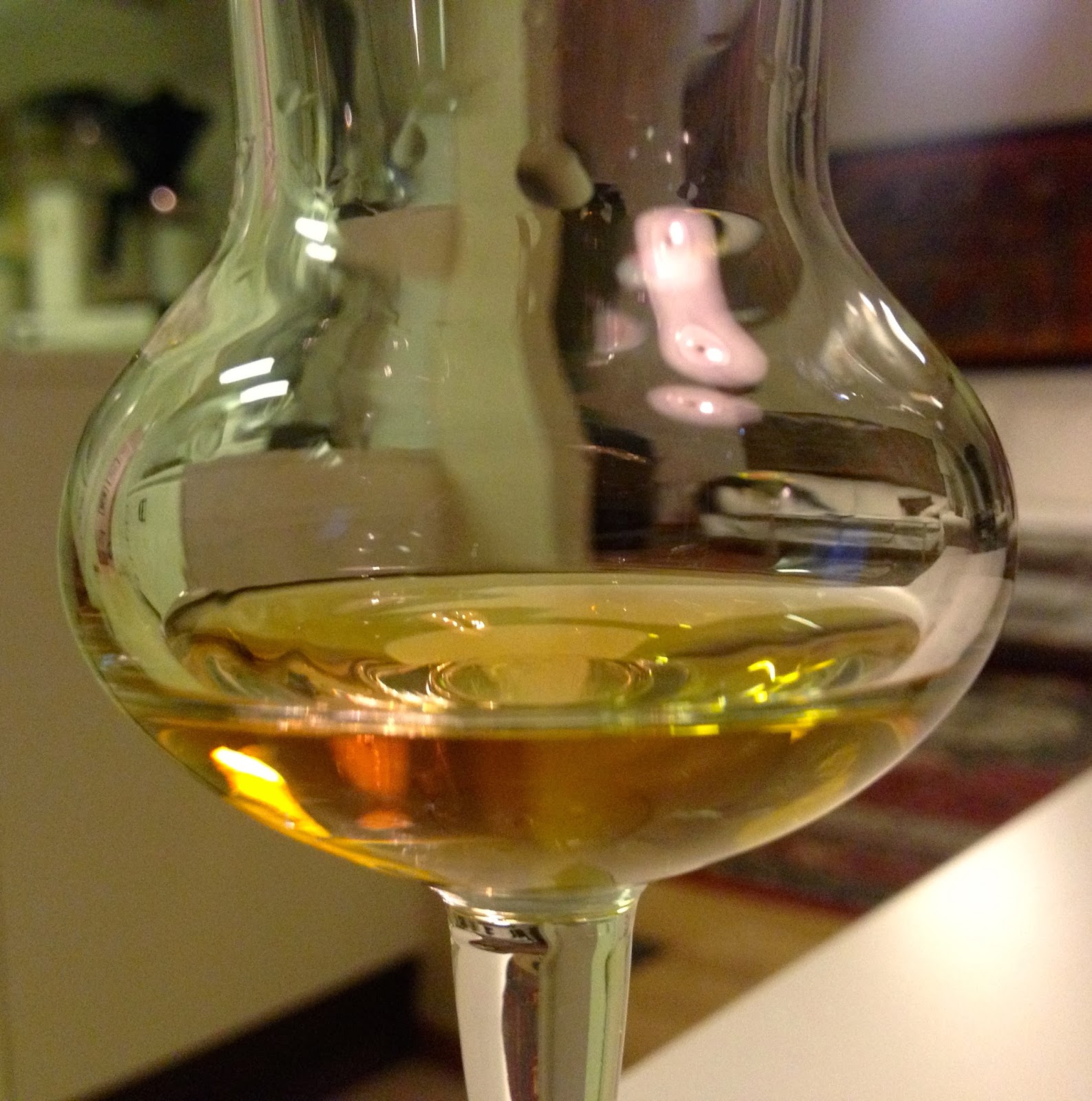 Nose:
With no water added this is obviously very strong whisky! It’s so strong that the peat and the alcohol strength itself are the two main characters in this drama that are fighting to win the battle of attention. Still, trying to grasp the peat at this high strength, it’s robust and quite farmy but somehow still very soft. Interesting style of peat! At this strength the whisky is also quite ”botanical”. Beneath all this in the top layer, that is hard but not impossible to get past, I find a beautiful and very soft vanilla and a nice malty nose. Okay, let’s add some water to see what happens (I add water to another glass so I can nose and taste parallell…)

With just a little bit of water, maybe 10 small drops into the same amount of whisky that’s in the picture of the glass, the whisky really settles down on the high strength, everything get’s reaaaaaally smooth and very malty. Now we have an almost biscuit-y (digestive crackers) and buttery nose. Some really nice fudge coming through. The peat also calms down of course but at the same time it developed into a quite sweet, almost brownsugar-y and almond-y peat. 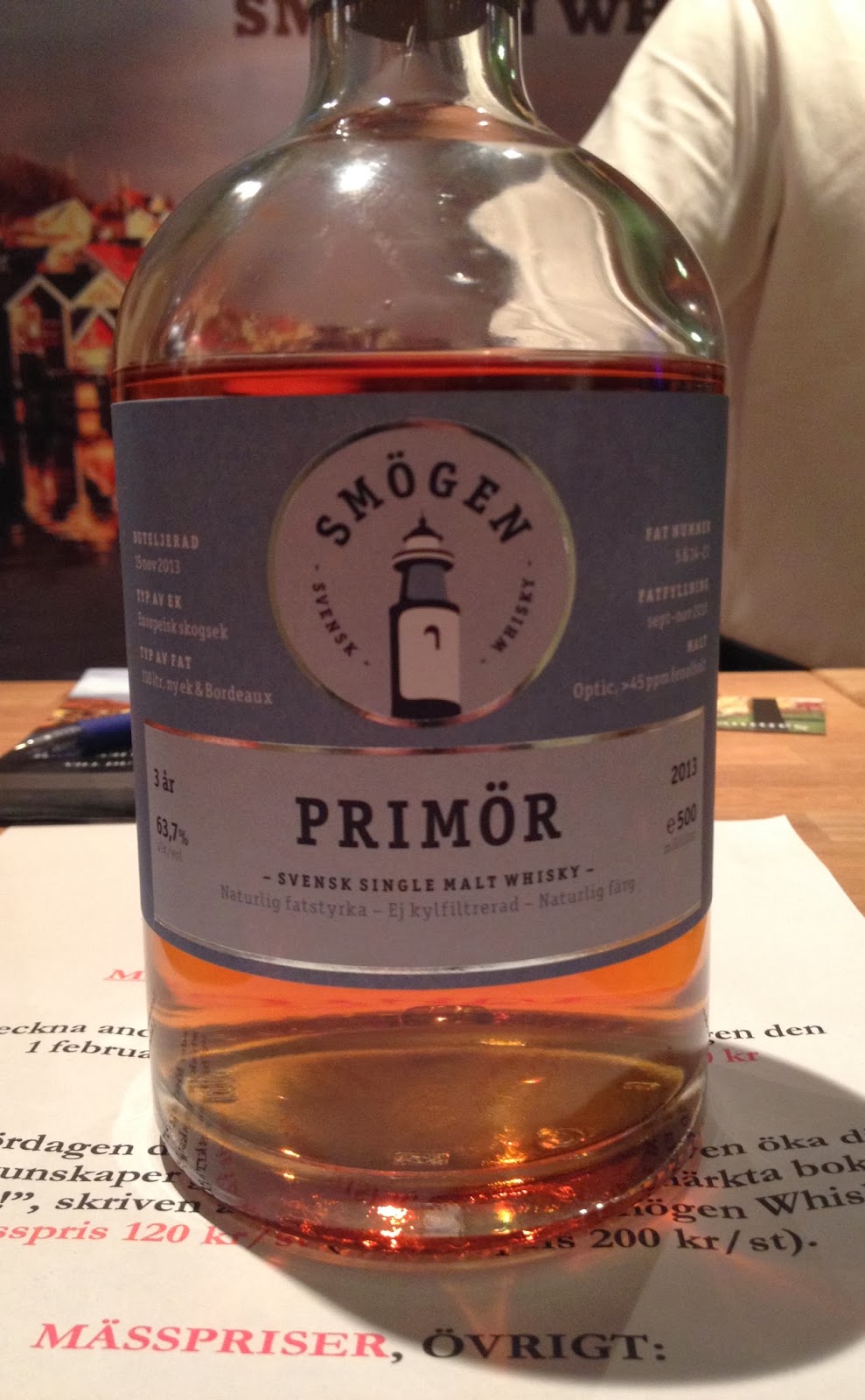 Palate:
Returning to the glass with no water added, let’s have a taste. Oooh! This is great, for sure. It starts of on a very sort of salty peat. The strength actually isn’t too much (or is this a warning sign?). Of course you can almost feel the whisky evaporate from the tounge up your mouth but still, it’s very beautiful at this strength. There is lot’s of different fruit-y-ness, the main stuff is sultana raisins, something reminding me of baked or dried apples, but also moving over into sun-warm red grapes. This fruit-y-ness is complemented by a hint of poitin-spirit. Everything get’s quite dry after 4-5 seconds and the dominant aftertaste definitely is that brownsugar-y peat. Very nice!

Let’s turn to the glass with just a little bit of water: Oh yeah, adding to the above, there is now a nice fudge and vanilla combination that comes first, but quite fast after that I get the very salty peat back, then malt-y-ness, just a tiny touch of poitin and finishing of on digestive crackers, unwhipped cream and soft peat…

Well, let’s send a big congratulations to Pär for his very exciting and interesting whisky. I’d say that all in all this is a very mature 3 year old! Well done and Slainthé! 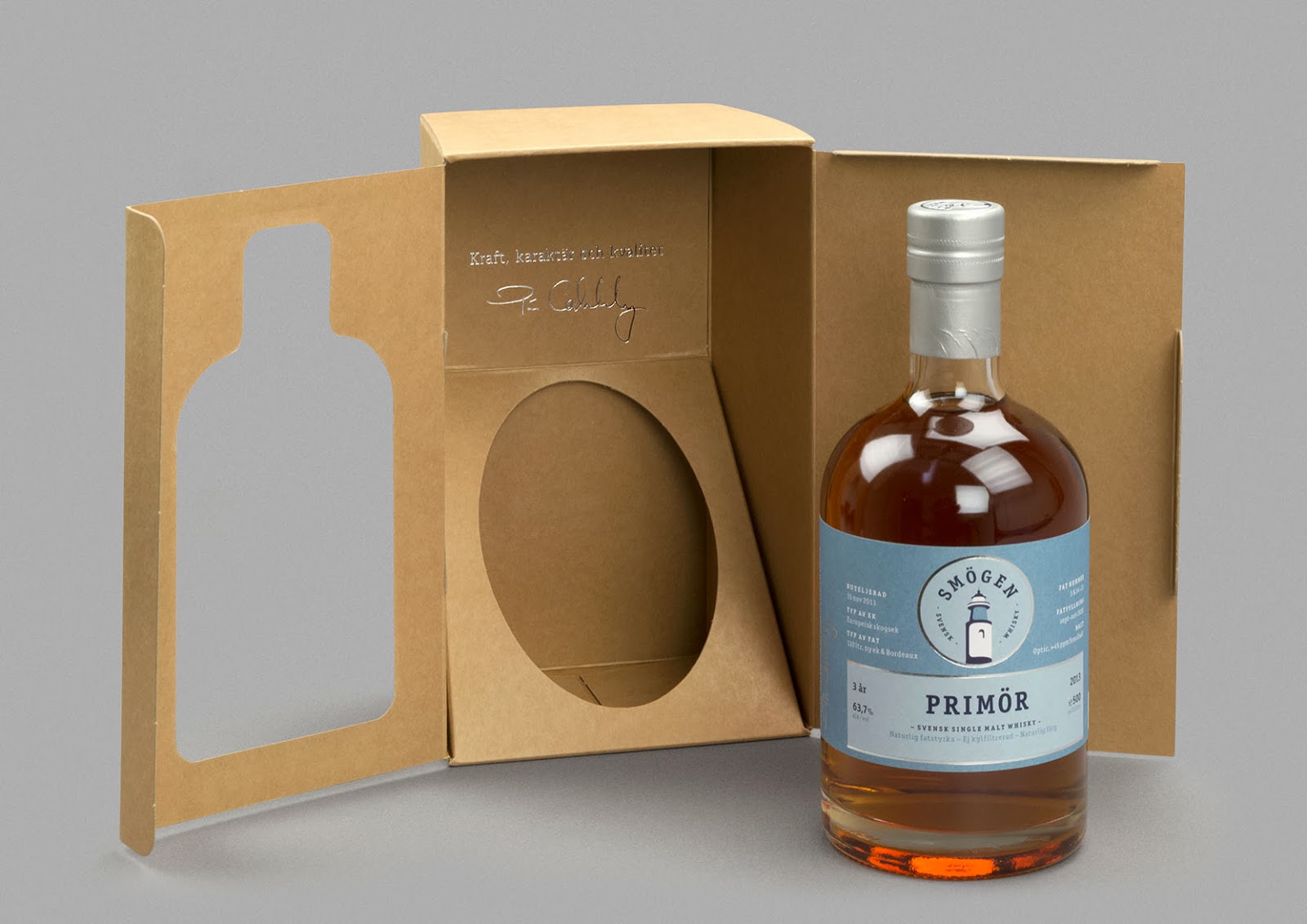 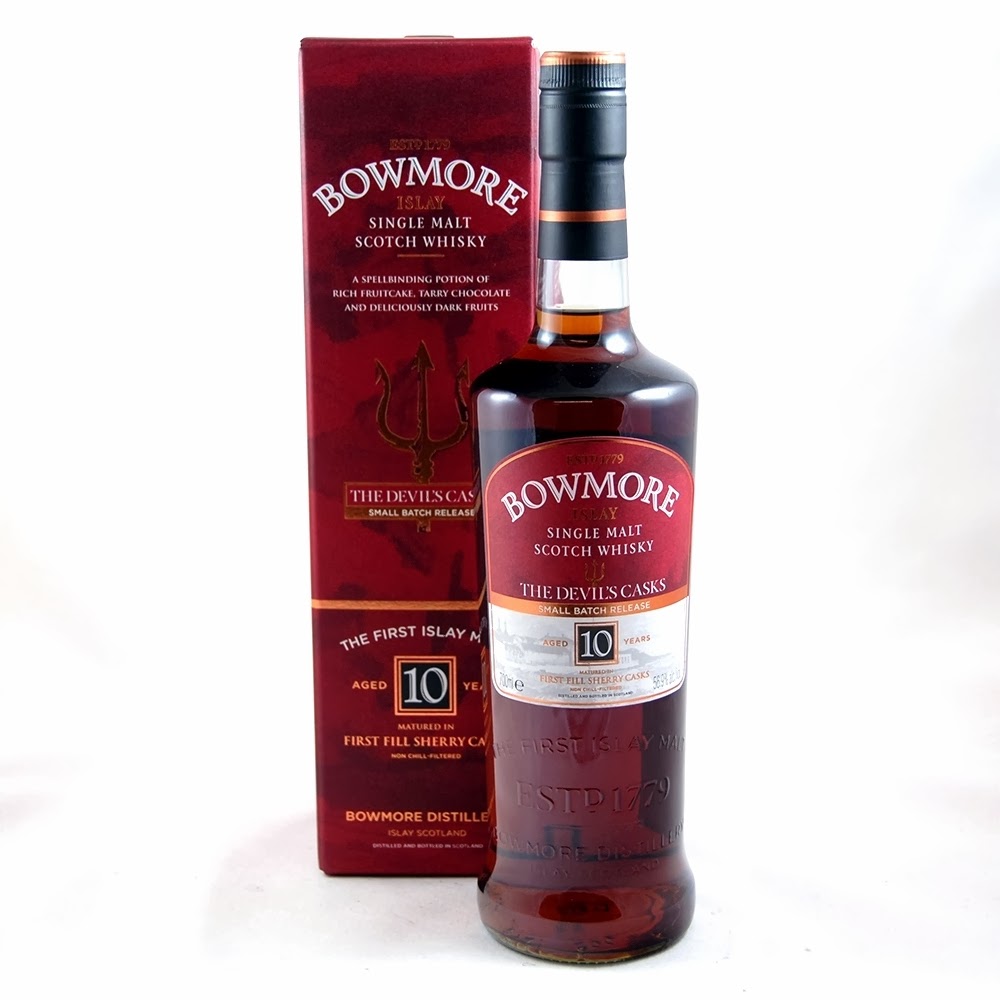 Hey folks! Finally the time has come for me to try the well received and much hyped (?) small batch release Bowmore Devils Cask! I've longed for this moment for quite some time know, the sample has been in my sample-stash for more than a month but there has been some other whiskies to try that have gotten in the way and I simply did not want to rush it with this one since I've heard it's a beauty.

A big thanks to Håkan for being very generous and just sending me a sample for free! Thanks!

Okay, as far as I've heard this has been entirely matured in first fill sherry casks for ten whole years and then bottled at cask strength. Whether it's european oak or american oak I don't really know. What I do know is that this whisky has been giving of wonderful scents ever since I poured a dram in the glass to shoot the photos. Let me tell you, absolutely wonderful things on the nose here!

Nose:
Oh yeah! Just having the glass quite far from my nose I get really dark raw-sugar notes, there is something quite orange-y in there too, mixed together with the classic sherry stuff such as dried figs, even a bit chocolate-y, something really far away even reminding me of mint chocolate... I'd say the peat is really well hidden in there... Mmm, this is deep stuff friends! All of these things are the foundation of the whisky and on top of that layer we have really really high register notes of leather-something and also citrus. Ok, let's see what's on the palate

Palate:
Ooooooh! Starts off strong but not too strong, mainly peat and some very intense sweet/citric notes in the very fast first phase of the whisky. This is brutal but friendly. Moving fast from the very tip of my tounge back into my mouth. Then comes the dried figs, dark raisins, some orange-y stuff, it get's quite dry and then... something reminding me of fireworks ashes or gunpowder (not that I've ever eaten it but you know...) and then a touch of violet (flowery-ish) candy. Now that I take another sniff and nose the glass again that violet stuff is on the nose too, hmm...

Anyway, this was a very interesting experience and as I've said some times before, the balance or interplay between the sherry and the peat is just great, and I'd actually say that the main focus here is brutal sherry-influence and then comes the peat. Slainthé and see you soon! 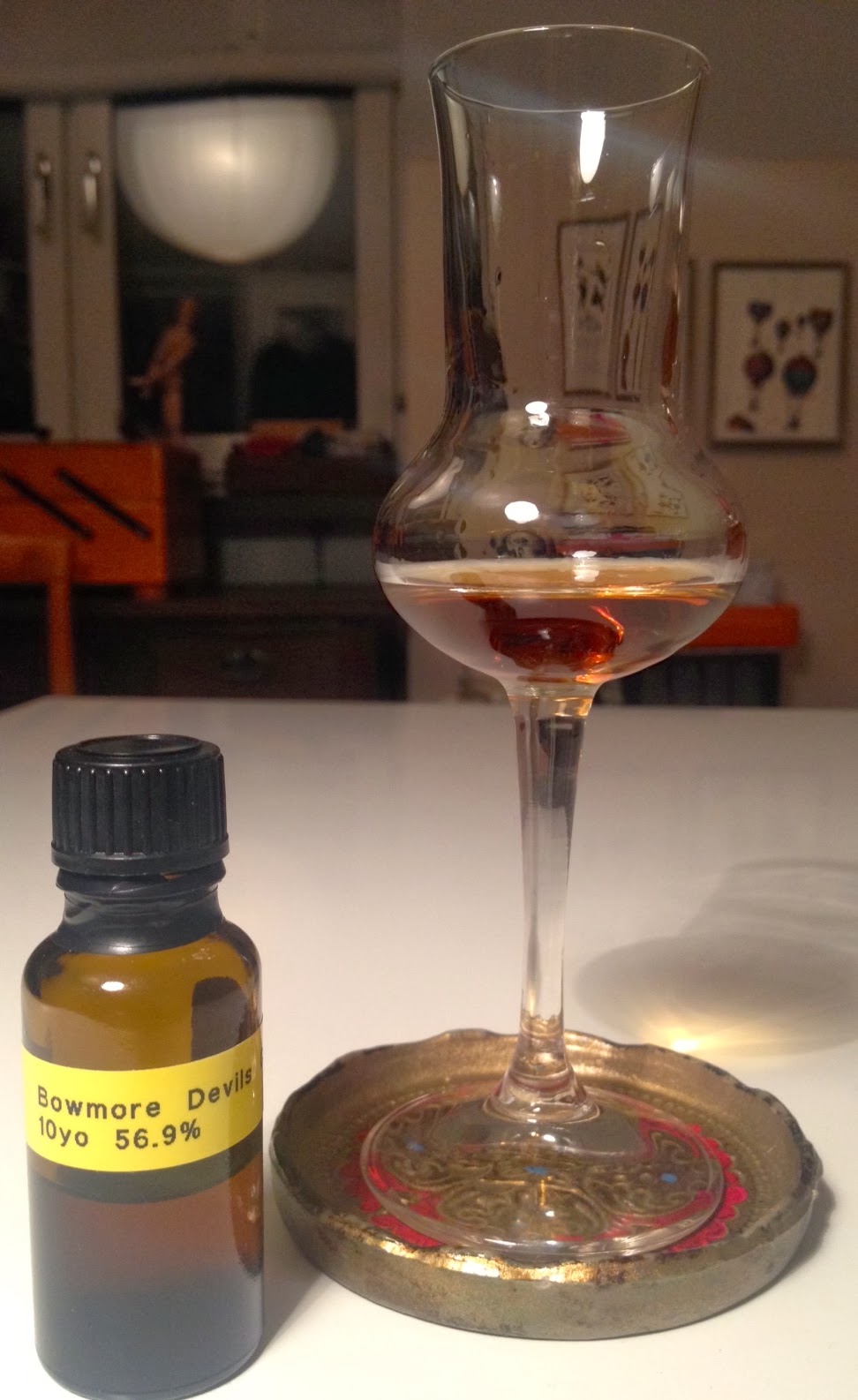 That way you can see what I said about this picture and get updates about SamuelWhisky on a more daily basis : ) 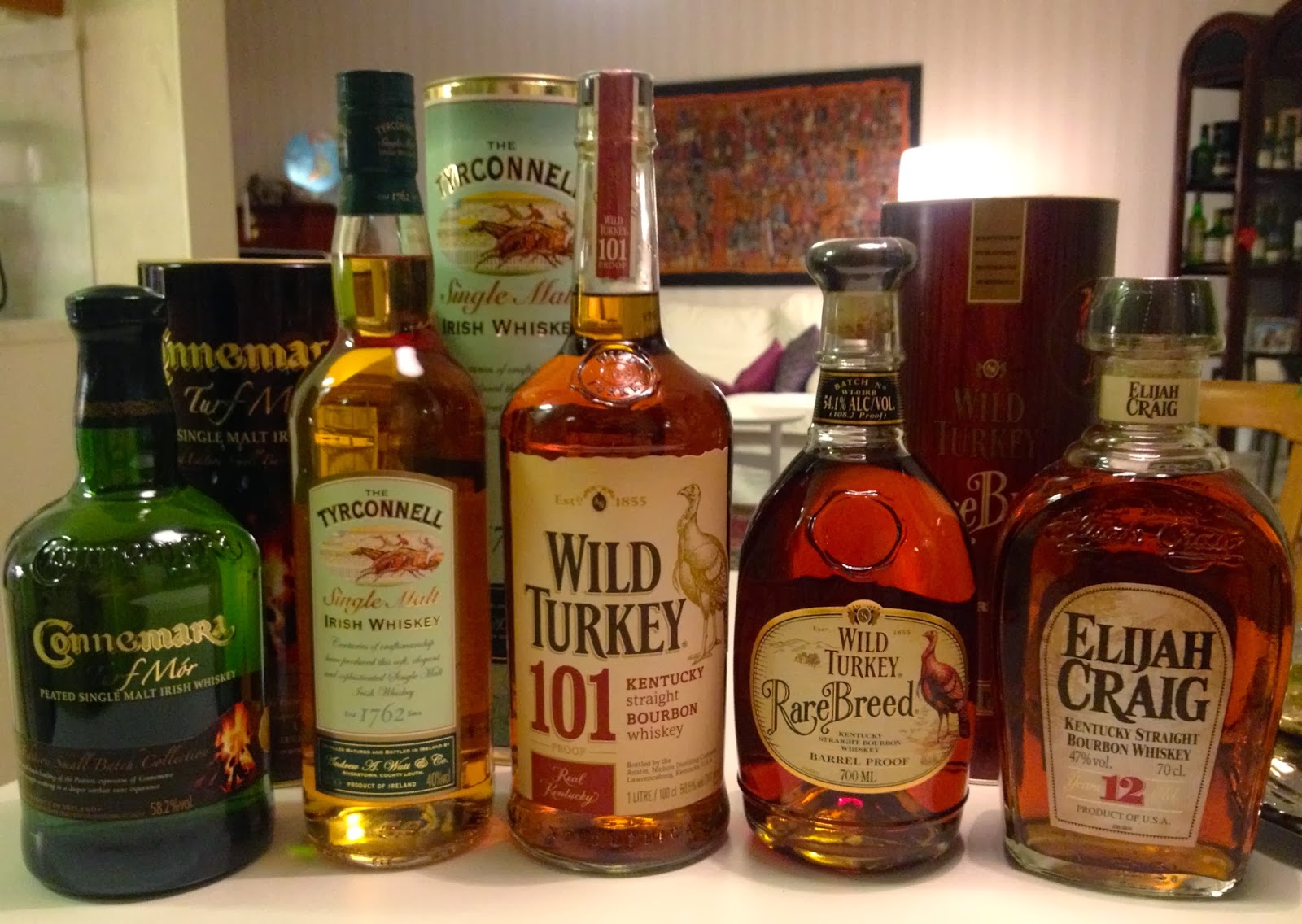 Slainthé and big thanks for being a part of SamuelWhisky!
Upplagd av SamuelWhisky kl. 21:51 Inga kommentarer: